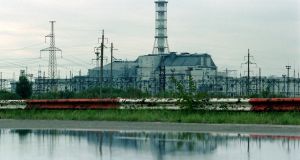 Chernobyl. The aftermath of the (much smaller) nuclear accident that occurred this month in Russia’s Arkhangelsk region carries unsettling echoes of the Chernobyl cover up of 30 years ago. Photograph: Yuri Kazakov/Reuters

In an early scene in Chernobyl, the HBO drama written by Craig Mazin, the local party apparatchiks have gathered in an underground bunker at 4am to discuss that day’s explosion at the nuclear power plant.

The committee members are debating what to tell the public. One young comrade, horrified by the sight of firemen vomiting on the ground, argues that the public must be told the truth and that the town should be evacuated. With panic gripping the room, an elderly party veteran, Zharkov, gets to his feet.

“It is my experience that when the people ask questions that are not in their own best interest, they should simply be told to keep their minds on their labour – and to leave matters of the state to the state,” he says. The city had to be sealed off. No one was to leave.

The phone lines were to be cut. “That is how you keep the people from undermining the fruits of their own labour,” Zharkov says to applause from his comrades.

When the treaty monitors inquired about the outage, Russian authorities said they had suffered 'communications and network issues'

The official cover-up that followed the world’s worst nuclear accident is Mazin’s theme. Drawing on the work of Svetlana Alexievich and other journalists, the drama describes a systematic effort to suppress information and to minimise the scale of the catastrophe, even when it put thousands of lives at risk.

HBO’s Chernobyl is not about the danger of nuclear power; its subject is the danger of an arrogant, lying state that believes “our truth” – the words of another of Mazin’s party officials – is the only one that matters.

Russia in 2019 is not the Soviet Union of 1986, and Nenoksa is not Chernobyl. But the aftermath of the (much smaller) nuclear accident that occurred this month in that remote town, in Russia’s Arkhangelsk region, carries unsettling echoes of the events of 30 years ago.

Two weeks after the incident, the Russian government has yet to explain what happened, why it happened or what damage it caused. The military initially said a fire had broken out when a liquid-fuelled rocket engine exploded at a testing site, but that radiation remained at normal levels.

However, local officials in Severodvinsk, about 30km away, said radiation detectors showed a spike, and Russian media later reported that radiation briefly rose to 200 times normal background levels. The reports were quickly taken off the Severodvinsk municipal websites, but not in time to prevent a run on iodine.

Rosatom, the Russian atomic energy agency, eventually said that the explosion occurred while testing an “isotope power source in a liquid propulsion system” – an obtuse way of confirming a nuclear accident.

Seven people are known to have been killed. But still the authorities were scrambling to contain the flow of information. Medics were made to sign non-disclosure agreements, the Tass news agency reported.

When the treaty monitors inquired about the outage, Russian authorities said they had suffered “communications and network issues”, according to the Vienna-based organisation. Yet Russian deputy foreign minister Sergei Ryabkov later appeared to contradict that statement by pointing out that Russia’s transmission of data from the sensors – an international system installed in response to the Chernobyl disaster – was voluntary.

Western analysts have speculated that Russia could have been testing an experimental nuclear-powered cruise missile announced by President Vladimir Putin last year.

The missile, which Russia calls the Burevestnik and Nato refers to as Skyfall, would in theory have unlimited range and be capable of evading US defence systems because of its unpredictable flight paths.

Russia is not alone in trying to cover up its nuclear accidents. The US lost a nuclear weapon off the Japanese coast during the cold war and didn’t acknowledge it for years. But this month’s episode shows that it has become much harder to pull off a large-scale cover-up today.

Message boards on the Vkontakte social network showed local concerns about the accident almost immediately, while the Russia-staffed (but Latvia-based) independent news outlet Meduza carried reports in which medics in the area said they were not warned that they were treating irradiated patients.

The wide availability of satellite technology data that would once have been available only to intelligence agencies also helped to shed light on the incident. Planet Labs, a firm that launches small satellites, released an image that appeared to show the Serebryanka, a ship that can safely collect nuclear waste, offshore from the Nenoksa missile test site on the day of the incident.

It may be a while before a full picture emerges, but it will emerge.

A few days before the Nenoksa explosion, the US National Academy of Sciences published a report in which scientists, using new radiation-detection networks, reconstructed data to demonstrate that a “sizeable” but undeclared nuclear accident had occurred in Russia two years ago – possibly at the Mayak nuclear site, once used to produce weapons-grade plutonium.

A plume of radioactive material had been observed spreading across Eurasia in 2017, and this appears to explain why, even if Rosatom denies any accident took place.

Leave matters of state to the state, Kharkov says. That assumes the state has monopolistic control over information. As the events of the past two weeks have shown, those days are long gone.