Rite & Reason: Our world is dominated by an aimless secularist view of life

With freedom the supreme value, a profound cultural revolution is being promoted 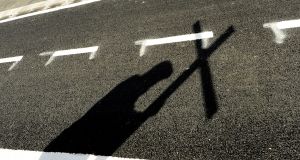 The hidden influence of Christianity: can human morality survive without it? Photograph: Cyril Byrne

John H Evans, a sociology professor at University of California, has written a new book, What Is a Human? What the Answers Mean for Human Rights. Having surveyed 3,500 adults, he concluded that people’s view of human dignity does influence their judgments on what is acceptable treatment of other people.

With secularism now being made Ireland’s unofficial State religion, we need to ask what its view of human life is and how it is reshaping the way we treat others. The core of liberal secularism, the central cultural value today, is radical freedom, promoted in phrases such as “right to choose” and “personal autonomy”.

To understand this freedom we might imagine a group of people deposited in a trackless desert with just enough supplies to get them to the nearest safety point, but with no directions for getting there. With their lives at stake, and with each one enjoying complete personal autonomy, how will they choose a direction? As time passes, with no rational grounds for their choice of direction and no destination in sight, what emotions may they experience: anxiety, frustration, cynicism, resentment, apathy, rage, blind hope, despair?

What kind of quarrels or violence will erupt among them? Will some head off on their own? Will others try to steal from the common resources? Will the strong abandon the weak?

Will some seek to numb their distress with drugs? Will others opt to distract themselves from their plight by making the best of life until death comes? Will still others end the misery by ending their own lives? A final scene might show a few survivors eating their last meal, still with no idea where safety lies.

This scenario illustrates the plight of the modern world, dominated as it is by the aimless secularist view of human life and the ideology of choice.

With the turn away from Christianity in post-Reformation Europe, and then from God, this notion of freedom took off. Morality in future would be guided by reason alone, with no reference to religious beliefs or a supreme being. However shallow it was, this notion sounded reasonable, the only basis for peace between groups with conflicting religious views. And it worked for a few centuries, thanks to the hidden but continuing influence of Christianity.

Today, with freedom the supreme value, a profound cultural revolution is being promoted, and whatever restricts our demands or “rights” is resented as an imposition. We don’t want directives of any sort.

Tradition, the wisdom of past generations, is mocked, moral law is considered a fiction, and we refuse to ask if our behaviour is good or evil. State-made laws must be kept to a minimum, moral judgments are “hate speech”, and church authority is rejected by many “Catholics”.

Human nature itself is seen as a restriction of freedom, with State-sponsored gender ideology absurdly belittling our sexuality, and we are rapidly abandoning the idea that we are responsible for others, especially children and the sick.

Worship of God is neglected or despised, justice is the will of the powerful, human life is devalued, marriage is undermined, mothers are set against their unborn children, fatherhood is treated with contempt, consumption measures our success in life, happiness is momentary.

To all this disintegration, rooted in the loss of ultimate hope, the only response now allowed is “tolerance”, permissiveness, being non-judgmental, minding our own business.

And the process of destroying the Christian foundations of our society continues, with little concern for the chaos being created and the immense suffering this causes.

Secularism rejects all hope of happiness or salvation beyond the earthly. Nor do its adherents want to be troubled by any offer of salvation. They have been led to believe in advance that all such offers are a delusion.

But it need not be that way. Given Christianity’s immense role in forming western civilisation, and the great hope it offers, it would be irrational not to approach Christ’s gospel and Church with at least an open mind.