Repeal campaign should not dodge the 12-week issue

Campaigners to repeal and retain the Eighth Amendment took to the streets of Dublin as the countdown to the referendum begins. 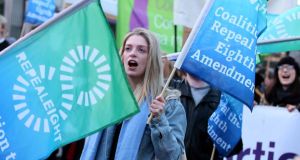 The most recent poll conducted for this newspaper, in January, found a “clear majority of voters” (56 per cent) backing repeal of the Eighth Amendment. Photograph: Mark Stedman

The forthcoming referendum on the Eighth Amendment is going to be won, and lost, on the “12-week” issue.

While one side is embracing it with gusto, the other appears nervous of it. The most recent poll conducted for this newspaper, in January, found a “clear majority of voters” (56 per cent) backing repeal of the Eighth Amendment and the Government’s proposal to legislate for abortion on request up to 12 weeks, with 29 per cent against and 15 per cent undecided. Even more, 64 per cent, strongly back a woman’s right to choose.

10 Colin Farrell: ‘After 20 years of drinking the way I drank, the sober world is pretty scary’

12 Mary McAleese: My ‘heart went out’ to Mary Robinson – and to Princess Latifa

14 Air to the throne: Meghan and Harry set to lift lid on royal split in TV interview

17 Covid-19 Vaccine Tracker: What's available in the Republic of Ireland and what else is coming?

18 Stuff happens: Why you have so much household clutter – and how to get rid of it

20 Biden on brink of passing historic $1.9tn boost to US economy

23 Laura Whitmore: ‘I’ve had enough of being trivialised and gossiped about’

31 Bank of Ireland closure brings out true grit in Abbeyfeale

34 ‘He strangled me to the point where I couldn’t breathe, I couldn’t scream’

36 Ireland’s young adults on dating, youth-blaming and being bored

37 Jennifer O’Connell: We did not need Pontins to teach us about anti-Traveller discrimination