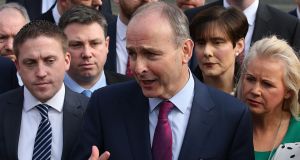 Fianna Fáil leader Micheál Martin with party members at Leinster House. He set out in the Dáil in clear and unambiguous terms his problems with Sinn Féin. Photograph: Stephen Collins/Collins Photos

When Hernán Cortés came ashore in what is now Mexico in 1519, he burned his ships, shutting off any possibility of retreat to Spain. The options were clear to his men: conquer or die. They conquered. On Thursday evening, as the first meeting of the 33rd Dáil drew to a close, Micheál Martin did something similar to stout Cortes.

Rising to address the Dáil after the conclusion of four unsuccessful votes on the nomination of the next taoiseach, Martin set out in clear and unambiguous terms his problems with Sinn Féin, and the reasons he would not countenance leading his party into government with it.

Those interested in reading the full speech – and McDonald’s fierce, angry reply – can find it on oireachtas.ie. It levels familiar charges at Sinn Féin – from individual cover-ups of murder and child abuse since the Good Friday agreement, to being part of an armed conspiracy to overthrow the State over many years, to the allegation – borne out by evidence at the recent Cash-for-Ash inquiry in the North – that Sinn Féin ministers are subject to some external authority, either in the party or in the overarching republican movement’s command structures.

It was deliberate and noticeable that most of Martin’s charges are not “legacy” issues – they are about the current culture and behaviour of the party. He concluded in clear terms that he would not change his position.

In response, McDonald accused the Fianna Fáil leader of having a “bitter and narrow mind”, though she did not respond to any of the specifics raised in Martin’s speech. Nor did she acknowledge them as legitimate.

Many in Martin’s party, sharing his vehement opposition to the idea of sharing power with Sinn Féin, cheered his words; others, realising how much the party is boxed in now, despaired. They all know that there is no way that Martin can or will change his mind on this.

His position will have been bolstered by Friday’s statement from Garda Commissioner Drew Harris agreeing with the assessments of the PSNI and the British government that the Provisional IRA’s army council still oversees Sinn Féin.

Harris’s words make it difficult – if not impossible – for either Fianna Fáil or Fine Gael to consider Sinn Féin as a potential government partner. Other parties will face difficult questions.

The suggestion is sometimes made that Fianna Fáil could change its mind about entering talks with Sinn Féin about coalition. This is not something I think is likely, but if it does the party will have to find itself a new leader. Obvious candidates do not abound. Which means the party’s only route to government is with Fine Gael.

There is a very strong view in Fine Gael right now that the party should lick its wounds in opposition. That is understandable after a bruising election, but not really sustainable in the medium term if the party believes in all that “party that founded the State” stuff, of which Leo Varadkar is so fond.

Varadkar’s stated position is that it is the job of the opposition parties to form a government. Once you subtract Fianna Fáil from this, that prospect recedes into the realm of fantasy.

The votes on Thursday have underlined, not contradicted, the tyranny of the Dáil numbers. The fact remains that there are three medium-to-big parties in the 33rd Dáil. Any two of them will be required as the basis for a majority government. Mathematically that gives us three possibilities; two of them have been ruled out.

If there is to be a majority government it will be made up of Fine Gael and Fianna Fáil.

Those who scream that this is a denial of democracy – and they will be many and cacophonous, on the streets and on social media – need to reflect on the nature of parliamentary democracy.

The small parties of the radical left insist that Fianna Fáil and Fine Gael should “step aside” and “get out of the way” to allow a left-wing minority government to be formed.

I asked them what they meant by this on Thursday, and they replied they wanted the two old parties firstly to abstain on a Dáil vote to allow McDonald to become taoiseach. The left minority government would then dare them to oppose left-wing policies and a left-wing budget, using the threat of calling a general election at which (the left assumes) the old parties would suffer further damage.

But why on earth would Fine Gael and Fianna Fail do that?

Politicians sometimes act unwittingly against their own long-term interests. But they rarely do so deliberately. Fianna Fáil and Fine Gael will not crawl away leaving the stage to McDonald, and she knows it.

If the Sinn Féin leader wants a government of the left she is going to have to convince enough people, by dint of compromise, coaxing and coercion (in other words: politics), to vote for her as taoiseach and support her decisions in government.

I expect she will start that process with the Greens shortly. So will the other parties.

It is blithely assumed in parts of Fianna Fáil and Fine Gael that the Greens will row in with the big two. That is a mistake, I think. The Greens will require very substantial policy concessions, implementing a step change in how Ireland deals with climate change, energy, transport, planning and biodiversity that would be extremely difficult to swallow for both Fianna Fáil and Fine Gael.

Of the two governments most frequently touted around Leinster House this week – the left-led minority administration and the FF-FG-plus-plus option – the first is very unlikely, and the second is extraordinarily complex and difficult to put together.

We may be here for some time.

1 Sligo woman jailed for 28 days over coughing in garda’s face
2 Coronavirus: 25 more people die in the State as new Garda powers come into force
3 Coronavirus: More ‘striking’ evidence BCG vaccine might protect against Covid-19
4 Coronavirus Q&A: What new powers have the gardaí been given?
5 Lockdown exit: How can Irish economy reopen without big health risks?
Real news has value SUBSCRIBE