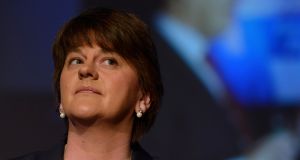 DUP Leader Arlene Foster claims she won the election but she only brought her base out – more unionists voted for her unionists than voted for other unionist candidates. Photograph Colm Lenaghan/Pacemaker Press

‘I won the election,’ said DUP leader, Arlene Foster, after the recent Stormont election. It was a blunt statement, impertinent too.

It might even be one of those statements – “They haven’t gone away, you know” – that follows Foster around for years to come.

It is true that Foster’s DUP came out in front of the other parties. The DUP has the biggest number of seats and Foster will continue as First Minister and Sinn Féin’s Martin McGuinness will remain Deputy First Minister – a position of equal importance to Foster’s, but the English language being the English language, the qualifier “deputy” immediately signifies to the brain that the position is less, though, politically, it is not.

Foster has every right to be happy with the result. In the simple way of Northern politics, she brought her base out – more unionists voted for her unionists than voted for other unionist candidates.

Happily for her, the UUP revival from the Westminster election stalled. Even better, the nationalist vote splintered a little. A few thousand nationalists embraced their inner red rebel and voted for People Before Profit instead of Sinn Féin’s “socialism” or the SDLP’s “whatever-we-are-having-today”. The odd thing is that so many people seem to find it odd that those from a Catholic/nationalist background might want to vote for “radical” parties such as PBP. Not a bit of it. Northern Catholics pick and choose political causes every bit as much as their Southern counterparts.

The nationalist political constituency of my youth would have included candidates from the Workers’ Party, SDLP, Sinn Féin (eventually!), People’s Democracy and Alliance; all of them fishing for the same, overwhelming, working-class Mass-going Catholic vote. Gradually that vote shrank to a choice between SDLP and Sinn Féin, like it did in much of the North.

So, it is no surprise that boredom, frustration and anger with Stormont among a traditionally nationalist electorate manifests itself with a protest vote. What is still surprising is how few Catholics cross the party line and vote for unionists.

Yes, it is true that many nationalists find unionist hypocrisy truly staggering. Unionists, for example, laud the rule of law – until there is a law they do not like and then, they, and they alone, can break it. Nationalists, on the other hand, must, must, at all times obey all laws.

Is it that hypocrisy that keeps Catholics from voting for unionist parties? After all, unionism, we are told, is a wonderful, tolerant, generous, open, political philosophy, one that makes small people great. It is truly odd then that after so many years of partition and enlightened unionism that so few Catholics have actually twigged to its benefits.

It is not as if Catholics – or at least those born after Vatican II – are uniformly people of principle and free from hypocrisy. I know Catholics who have done very well in the North and who vote Sinn Féin.

I know working-class Catholics who keep faith with the SDLP of John Hume and Seamus Mallon. I know Catholics who vote Alliance, a unionist party with a very small “u”.

All shades and all sorts

I know Catholics of all shades and all sorts and all kinds of morality. And the one thing they all have in common is that none of them vote for a real, proper, unionist party such as the DUP or those awfully nice middle-class UUP ones.

That tells you all you really need to know about Ulster unionism.

“I won the election.” No, the DUP collected enough votes within its own supporters to come out in front. For now. There will be another election along soon. And another after that.

What are the chances of the DUP or the UUP finding a Douglas Hyde by then?