Only Sinn Féin is stopping Sinn Féin reviving the Assembly 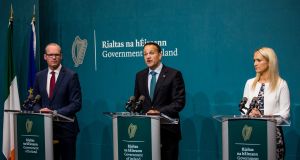 Tánaiste Simon Coveney, Taoiseach Leo Varadkar and Minister Helen McEntee. As Coveney and Varadkar never lose an opportunity to remind us, Brexit is a British policy. It’s not their fault. And they’re right. Photograph: James Forde

Fewer English around this year, says Peter O’Sullivan, a butcher in Sneem and maestro of the famous black pudding unique to that fortunate and picturesque south Kerry village.

Same story in Kenmare. And in Derrynane and Waterville and in Ballinskelligs, too. And over the mountains and across the Cork border into Schull and Baltimore – not as many of them around as last year.

A man looking ruefully over the boats in the harbour says his daughter’s English husband won’t come over on holidays this year, after the abuse he got last year over Brexit.

Brexit is not just a game of high politics, though it is certainly that. Its malignant spirit is seeping into the vernacular of life in Ireland in all sorts of ways. You would hope that personal relations can survive Brexit by the application of courtesy and the consideration of perspective. Not so easy in politics, though, where the stakes are huge. Decisions that will reverberate through life in Ireland and the UK – in the shared space between us – for the next 50 years will be taken in the coming months.

This week, Minister for Foreign Affairs Simon Coveney described the British government as no longer being a “reliable partner” on Brexit. It’s a long time since an Irish Minister said that about the British, or vice versa – though at least Coveney’s relations with the new Northern Secretary, Julian Smith, seem to have got off on a better note. The two buckos strolled out of Hillsborough and went for a pint in the local pub, I’m told.

Coveney’s accusation came after British prime minister Boris Johnson’s letter to European Council president Donald Tusk in which he formally resiled from the commitment given by his predecessor in the joint report of December 2017, which first gave us the backstop.

It’s a fundamental precept of international relations between co-operating states that governments honour the treaties and undertakings given by their predecessors. British officials hotly dispute that the withdrawal agreement falls into that category, not having been ratified by parliament. But it’s pretty darn close.

Irish officials are now seriously worried about the deteriorating situation on the ground in the North, which they trace directly to the Brexit-prolonged suspension of the institutions. Both governments promise they are defending the peace agreement, but the reality is that the Belfast Agreement is not working. Its model of powersharing is not functioning.

The only reason there hasn’t been rioting in recent months, according to one vastly experienced Northern observer, is that all the poison is on social media. Well, at least it’s good for something. But it won’t stay there forever. The two governments struggle to articulate a common purpose, let alone achieve it.

As ever, the North’s politicians show no sign of stepping up. The DUP prefers being feted by Westminster Tories, even as they know – they must know – they will be discarded when parliamentary numbers and circumstances allow. What has the DUP’s confidence and supply leverage delivered for the North beyond hurtling towards a disastrous no-deal that would wipe out swathes of small businesses?

Sinn Féin says it wants to get the Assembly up and running to make the case against Brexit, but what exactly is stopping them from doing that? The DUP says it will return with no preconditions. Sinn Féin could revive the Assembly and table a motion in favour of the withdrawal agreement – there is, after all, an anti-Brexit majority in the Assembly. It would defuse Johnson’s claims about the anti-democratic nature of the backstop if a majority of the elected representatives of the people of Northern Ireland were voting in favour of it.

Unfortunately Sinn Féin continues to use Brexit as a Trojan horse for a united Ireland. The approach is quite at odds with the party’s occasional paeans to unionists that it wishes to persuade and accommodate them with full respect and facility in a new Ireland. But then again, if you were serious about talking to unionists about a united Ireland, you wouldn’t have made Gerry Adams your frontbench spokesman on Irish unity, would you?

On Thursday, Sinn Féin, the Greens, the SDLP and the Alliance circulated a letter they had written to Tusk confirming their support for the backstop. But what’s the point in signing letters when you could be in the Assembly speaking for the people of Northern Ireland?

But leave that aside. This isn’t about Sinn Féin: it’s about Dublin’s responsibility to the North and the wider future of Anglo-Irish relations.

As Coveney and Leo Varadkar never lose an opportunity to remind us, Brexit is a British policy. It’s not their fault. And they’re right.

But as all governments know, just because it’s not your fault doesn’t mean you won’t get blamed for it. Varadkar might remember that if there’s a no-deal, he can hardly claim to have handled Brexit brilliantly.

The North is in a more precarious position than at any time since the Troubles. That this is largely due to decisions taken in the UK doesn’t mean that Dublin has no role. So when – if – Boris Johnson produces some sort of a replacement for the backstop, then Varadkar and Coveney will have to consider carefully whether it is better than rolling the dice on no-deal.

Of course, Johnson might never produce anything serious. Even if he wants to, it probably won’t be until after a showdown in parliament, and he might lose that. But if he does win, and he does produce a realistic alternative to the backstop – but only if it is truly realistic – then it will have to be considered carefully in Dublin.

1 Gardaí suspect botched murder attempt was bid to avenge Mulready-Woods death
2 Who are Ireland’s 17 billionaires?
3 Election 2020: FF edges ahead of FG as SF surges in new Ipsos MRBI poll
4 Rob Delaney: ‘As my career took off, my son got sick ... And then he died’
5 Dublin City Council throws out Iveagh Markets application
Real news has value SUBSCRIBE