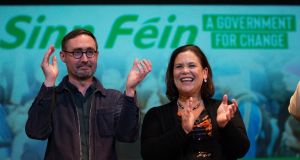 It takes a lot to unite nationalists and unionists in the North on any political issue, but the genuine and widespread sense of annoyance at the southern political establishment’s response to the Sinn Féin surge has been something to behold.

Unionists, long conditioned to being preached to about the need to embrace powersharing and demonstrate maturity by moving beyond a fixation with the past, find themselves lining up with northern nationalists to cry foul at the breathtaking degree of hypocrisy that has characterised the reaction from a political class and commentariat yet to pick itself up after being floored by the electorate’s verdict three weeks ago.

1 Minister resigns over Dominic Cummings’ Covid-19 lockdown trip
2 We are ‘sale agreed’, but can we go back with a lower offer?
3 Working from home: New costs, new stresses and little relief
4 Coronavirus: What will reopen in Ireland’s phases to ease restrictions?
5 The great unlocking: Top holiday destinations welcome back tourists
6 Fintan O'Toole: Last week's hysteria shows politicians and judges need to get a grip
7 Next government could bring in work-from-home tax incentives – Taoiseach
8 Five ways to enjoy a heatwave outdoors during lockdown, without breaking the rules
9 Gerry Thornley: Home and away Six Nations could be its ruination
10 Do we really want children taught by teachers dressed in visors and face masks?
11 André Leon Talley: How Anna Wintour threw her right-hand man ‘under the bus’
12 Eason to lay off 150 staff as it prepares for June reopening
13 Richard Corrigan offers €90,000 wedding prize for frontline healthcare worker
14 Swimming ban at Dublin's Merrion strand due to poor water quality
15 Tributes paid to Ireland’s deputy ambassador to China who died on Sunday
16 Leaving Cert students must register for calculated grades by Thursday evening
17 Unconvincing account may take some heat out of Dominic Cummings controversy
18 Joint accounts: if one of us dies, can the other access the money?
19 Women need a new world of welfare and work
20 Aviva 10-year ticket holders seek clarity over payment
21 Restaurants and gastropubs hope to avoid a dry reopening
22 What Courtney Love did straight after she left 1980s Dublin
23 Amy Schumer’s lockdown: ‘I watched Normal People, a beautiful show. There’s so much sex’
24 Teachers at Donegal school give sixth-year students a 1980s sendoff
25 Archaeologists are ‘quite sure’ they have found Red Hugh O’Donnell’s burial place
26 Dominic Cummings affair reflects Brexit exceptionalism
27 ESB shelves plan for €500m electricity generator at Poolbeg
28 Ryanair almost certain to oppose German government’s bailout of Lufthansa
29 No national clinical oversight of care being delivered to those in nursing homes, watchdog to tell TDs
30 Third level gears up for blended learning
31 Normal People: Paul Mescal donates chain to Pieta as RTÉ streams pass 2.5m
32 ‘An accident waiting to happen’ - Farm group criticises videos of machinery stunts
33 Prof Luke O’Neill: ‘It’s definitely beatable, Covid-19’
34 Tempted by a weeknight barbecue? Here’s how the pros turbocharge their grilling
35 Maureen Gaffney: ‘Covid-19 has scored a direct hit on our most basic psychological drives’
36 HSBC board rethinks overhaul and seeks even deeper cuts
37 Coronavirus: No new Covid-19 deaths reported in State for first time since March
38 How will the Covid-19 era affect our youngest citizens? Let us count the ways
39 Silly Billy: What the Ikea bookcase tells us about the true cost of fast furniture
40 How to make an endlessly versatile omelette that is perfect for picnics
Real news has value SUBSCRIBE