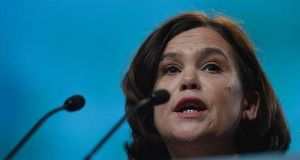 Mary Lou McDonald: Everyone knows the leadership handover to her is a foregone conclusion. Photograph: Getty Images

In his interview with Sarah Bardon published in Wednesday’s Irish Times, Gerry Adams expressed himself irritated at the suggestion that he might continue to be a puppet master for the Sinn Féin leadership after he steps down as party president next month. Adams asked in response: “Why is there not a presumption that Enda Kenny is controlling Fine Gael or that Eamonn Gilmore [is controlling Labour] or Bertie Ahern [is controlling Fianna Fáil]?”

The comparison which Adams makes with other political parties is frankly absurd. The transition in leadership between Adams and his successor as president of Sinn Féin is of a whole different order to that which has previously occurred in an Irish political party.

He has been the unopposed candidate for the party leadership for 34 consecutive years. He led in the party’s support for the IRA during its campaign. He was a key architect and implementor – along with Martin McGuinness – of the peace strategy which the party was forced to adopt from the late 1980s. He has overseen the spectacular rise of the party north of the Border and the incremental growth of the party here in the Republic.

The changeover to a new leader will also be atypical. Everyone knows that the handover to Mary Lou McDonald is a foregone conclusion. All the other leading contenders ruled themselves out of the contest.

A committee set by the ard comhairle to oversee the leadership election has announced that a special ardfhéis will be held in February. Ye it hasn’t felt the need, as of yet, to set any dates for either public or private hustings. McDonald will be approved as leader by general acclamation.

That is also nothing normal about the situation which McDonald as leader will find herself in. She faces a number of massive political and party challenges north and south of the Border.

Those north of the Border will be the most pressing. The party has been out of government there for more than a year. Responsibilty for that has to be shared with its putative government partners the DUP. Yet it is striking that Sinn Féin, which prides itself on its negotiation skills, has been left in such an impotent position at this crucial moment when Northern Ireland’s future is being shaped by Brexit negotiations.

The vacuum is reflected in the fact that many Northern nationalists now see the Dublin government as best protecting their interest in the Brexit process.

The delay in the Sinn Féin leadership changeover also risks a further delay in efforts to restore the Stormont assembly. If Sinn Féin is to be believed its current leader in Northern Ireland, Michelle O’Neill, holds that position at the pleasure of the current party leader. When many of us queried the lack of internal party democracy involved in her appointment to the post by Adams a year ago, we were told the role is akin to any front bench appointment which any party leader would make.

It follows, therefore, that in theory at least the next leader of Sinn Féin may replace O’Neill. This, of course, is unlikely, but it illustrates the conundrums which Sinn Féin sometimes talks itself into.

One would normally expect some shifts in a party policy when a leader changes, or at least a shift in emphasises, and so the DUP and the two governments would be entitled to await McDonald assuming the leadership before embarking on a further attempt to reboot the Stormont executive

The atypical manner in which power and leadership works within Sinn Féin was also exposed at the final meeting of the Oireachtas Committee on the Eighth Amendment last month. The Sinn Féin members of the Oireachtas committee, Louise O’Reilly TD, Jonathan O’Brien TD and Senator Paul Galvin, played a key role in the committee’s deliberations and in formulating the final outcomes. Yet they were not in a position to vote on the committee’s key recommendation one way or the other.

The reason given was that the proposal, allowing for abortion up to 12 weeks into pregnancy, went further than that adopted at Sinn Féin’s 32-county ardfhéis last November.

Fianna Fáil and Fine Gael have, in part out of necessity, allowed their parliamentarians to exercise conscience votes. But Sinn Féin says it members are bound by its ardfhéis position.

However, instead of imposing a whip requiring them to vote in line with the ardfhéis policy, the TDs and the Senator were required by the party to abstain. This came about not after consideration at an Oireachtas parliamentary party meeting but after what Bardon has reported separately was a series of meetings with a sub-committee of the party’s ard comhairle.

In this, as in many things, the internal workings of Sinn Féin are very different to those of other political parties.