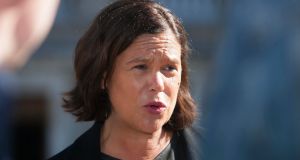 Mary Lou McDonald, Vice-president of Sinn Fein. The party has long rejected notions that it is controlled from north of the border

The principle impact of the report on the structure, role and purpose of paramilitary groups published this week by Northern Secretary Theresa Villiers will be played out in the politics of Northern Ireland.

The confirmation in the report that the IRA and loyalist groups endure, albeit in a greatly diminished form, also obviously has significant crime and security implications North and South.

What the report has to say about the current relationship between Sinn Féin and the Provisional IRA, however, could also exert significant impact on politics in the Republic, particularly in the context of an impending general election.

It is ironic that the same report which DUP leader Peter Robinson has interpreted as giving him sufficient cover to re-enter government with Sinn Féin in the North is likely to put greater distance between Sinn Féin and the Government in the Republic.

In the part of the report dealing with the IRA the authors say that “the structure of the IRA remains in existence in a much reduced form, including a senior leadership, the provisional army council and some departments”.

The report goes on in the next paragraph to say: “The IRA members believe that the provisional army council oversees both the Provisional IRA and Sinn Féin with an overarching strategy.”

“Overarching” is a very interesting choice of word. It is defined as “encompassing”, “extensive”, or “general”, “dominating” or “embracing all else”. Synonyms include “important”, “major” and “key”.

To speak of the provisional army council “overseeing” an overarching strategy for Sinn Féin is to suggest that the army council is central to shaping all the important objectives for the political party.

The report doesn’t say otherwise. It suggests that the IRA army council is central to setting strategy, not that it tells Sinn Féin what to do. In reality, (and this is my assessment not theirs), the IRA’s influence or control over Sinn Féin is likely achieved by an overlap of personnel between the army council and some at the highest level of Sinn Féin.

It echoes the relationship a century ago between the Irish Republican Brotherhood and the politicians leading the independence movement, the precise nature of which historians still have not been able to decipher.

The three-person panel which authored this report included a British Liberal Democrat peer, a former senior Northern Ireland civil servant and a lawyer.

The panel is effectively a once-off revival of the Independent Monitoring Commission (IMC)which had existed until 2010. That was a troikia of former British, Irish and international securocrats who used to monitor and report regularly during the long peace process on the status and operation of paramilitary organisations

This week’s report, like the IMC reports, is based primarily on an assessment of the intelligence gathered by the PSNI and MI5. The appendix to the report sets out how the intelligence relied on was gathered. It includes direct surveillance, electronic eavesdropping, communications intercepts, informants, community information and open sources like the internet.

Sinn Féin has sought to rubbish the process behind this report even though only a few weeks ago Sinn Féin was citing the final report of the IMC on which the current process was modelled to bolster the suggestion that the IRA had completely disbanded.

Gerry Adams has suggested that these passages in the report amounted to “mischief-making” by MI5 designed to undermine his party.

One would have to think, however, that if British spooks were going to lie about the level of connectivity between Sinn Féin and the IRA army council they would do it using less nuanced and more damaging terms than those quoted above.

Many have long spoken of a sense that there is a controlling West Belfast clique which exerts considerable influence on Sinn Féin’s strategy even in the Southern political marketplace.

Some say this controlling hand explains why the party’s response to controversies like Mairia Cahill’s revelations has been so inept.

Sinn Féin has long rejected such notions as nonsense.

The suggestion that some body of persons north of the Border may have a significant, perhaps even controlling, influence over how Sinn Féin operates even in the Republic is given some credence by this report.

It will reinforce the concerns many have about any prospect of the party being near government in the Republic next spring.

1 Gardaí believe men in Cork murder-suicide chose to let woman survive
2 Supermarkets compared: How Dunnes, Lidl, Tesco and M&S measure up
3 ‘In Crete I pay 70% less than I paid for a shoebox apartment in Dublin’s docklands’
4 Richard Ford: America could fail. I have never felt this way before
5 Ireland ‘outperforming almost all European countries in controlling spread of Covid-19’
Real news has value SUBSCRIBE