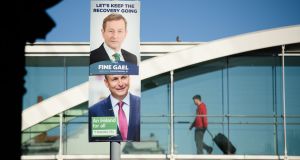 On October 20th, 1986, a remarkable political event took place in Israel. The prime minister and the foreign minister swapped jobs. What made it particularly remarkable was that the two men were the leaders of Israel’s largest political parties.

The outcome of the 1984 Israeli election meant that neither the Likud party or the Labour party had sufficient numbers to make up a majority in the Knesset. After seven weeks, with a new election on the horizon, the two larger parties sat down for three days of non-stop negotiations and put together a finely balanced programme for government.

Given the bitter ideological differences and intense political competition between the two parties, few Israeli commentators expected their powersharing arrangement to last more than a few months. The Likud-Labour coalition lasted until 1990.

There are no constitutional or practical reasons why a similar coalition, with or without a rotating taoiseach, couldn’t happen in Ireland. The job swap, which proved possible for Likud and Labour in Israel in October 1986, could prove possible for Fine Gael and Fianna Fáil in October 2018.

If, as seems likely, today’s election delivers a result where a combination of Fine Gael and Fianna Fáil is the only workable and sustainable majority for government, then anything is possible.

There are a number of factors that would make such a coalition easier in Ireland. There are no strong ideological differences between Fine Gael and Fianna Fáil. The Civil War fault line that has shaped our party system is in many ways an accident of timing in Irish history.

At the point in the early 20th century when first mass male suffrage and then mass female suffrage was introduced, the struggle between capital and labour was the dominant political division in most European countries, giving rise to the left-right party systems.

At the same time in Ireland, however, politics was dominated by the independence struggle. In the 1918 election, the political wing of the Irish revolutionary independence movement swept the boards in the parliamentary elections.

When a few years later that independence movement split over the terms of the Treaty, the party system severed accordingly, and the division in our system took hold, represented ultimately by Fine Gael and Fianna Fáil.

The only truly definitive difference between them was on policy towards the North, almost all of which dissipated in the 1990s when consensus emerged around the peace process.

Over the last few decades the heat has also been taken out of political competition on social issues, a point illustrated most recently by the fact that both Fine Gael and Fianna Fáil were on the same side of the marriage referendum.

There are strong reasons why many in Fianna Fáil will argue that they should not go into government with Fine Gael, but most of these are selfish political reasons shaped either by concerns for the party’s prospects and/or fears about the rise of Sinn Féin.

If they go into coalition after this election, then Fianna Fáil and Fine Gael will be more equally matched, not only in terms of seat numbers, but also in terms of government experience.

Fianna Fáil would also be entering government on the up, buoyed by a strong election campaign in which it increased its seats and in which its leader had attracted much public approval.

To paraphrase the late Séamus Brennan, not only would Fianna Fáil be a coalition partner experienced at “playing hurling at senior level”, it is a former champion in the sport of government.

Fianna Fáil faces real challenges to sustain its recovery in the increasingly fragmented party system irrespective of whether it is in government or opposition.

It has a prospect of sharing government at a time when there will be resources to achieve policy objectives.

Tomorrow morning votes will be counted, over the weekend results will be declared, and in the weeks that follow the Rubicon will be crossed.