Newton Emerson: There is a backstop deal to be done 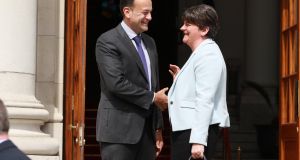 Taoiseach Leo Varadkar with DUP leader Arlene Foster. The DUP is now afraid the British government or the House of Commons will ditch the all-UK backstop, leaving the Northern Ireland one in place and deepening the potential sea border. That gives the DUP and Dublin a powerful shared interest in getting the withdrawal agreement through largely unaltered. Photograph Nick Bradshaw

An interview by Poland’s foreign minister kicked off this week’s backstop wobbling. Jacek Czaputowicz said Ireland and the UK are playing “a game of chicken” and the backstop should be given a five-year limit to avoid a “frontal collision”.

However, an article by Portugal’s former Europe minister, also published on Monday, was more interesting. Bruno Maçães delved beyond Poland’s frustration with getting a deal over the line and damned the whole structure of negotiations. “The Brexit talks were badly designed from the start,” he wrote for the Politico website.

1 Coronavirus: What we know so far about how Ireland is affected
2 ‘I woke up the next day in a guy’s house covered in bruises’
3 ‘Several killed’ in shooting at Milwaukee brewing company
4 Mass gatherings due to go ahead in Ireland amid coronavirus outbreak
5 Cancellations and confusion as coronavirus threat edges closer
6 Stormont finance minister told at Sinn Féin rally he has nothing to apologise for
7 Coronavirus: Ireland plans for massive increase in tests
8 Newton Emerson: Letting IRA exist just enough to not exist continues to taint politics
9 Limits of EU power appear in time of a crisis like coronavirus
10 Bank leaked my loan request to family who tried to rip me off
11 Dave Hannigan: Tyson Fury, Trump’s perfect heavyweight champion
12 What is coronavirus and what should I do if I have symptoms?
13 Soreness is good, scales are pointless: The 10 biggest myths in fitness
14 Flight attendent seeks High Court injunction against Aer Lingus
15 Woman (38) appears in court charged with murder of Garreth Kelly
16 Dublin stabbing: Parking space was at centre of previous rows, gardaí told
17 Dublin nightclub drops entry fee and asks for charity donation instead
18 The Invisible Man review: Tenser than Christmas at the in-laws’
19 Coronavirus: British government calls for calm after eight schools closed
20 Gerry Thornley: IRFU facing logistical issues rescheduling Six Nations games
21 Independent groups compound difficulty of forming government
22 Gordon D’Arcy: Change has to happen before Ireland's trip to Paris
23 Couple challenge decision over access to Killarney lake
24 State would need 16 fighter jets for full air defence capability, expert says
25 Coronavirus: Some schools send pupils home following Italy trips
26 Say no to groupthink: how philosophy can transform learning
27 Woman told comedian she would ‘put him on Facebook’ after alleged groping
28 Sinn Féin’s problem with names much more than mere wordplay
29 Miriam Lord: Lady Lou crowned the People’s Taoiseach at Liberty Hall
30 Coronavirus: Irish holding back on holiday plans
31 Irish Rail may have to suspend Sligo line services due to floods
32 Garda Commissioner ‘stands over’ IRA-Sinn Féin remarks
33 George MacKay: ‘My influences? Conor McGregor and wallabies’
34 Claim that IRA controls Sinn Féin ‘based on hearsay’, says Ó Cuív
35 UCD campus first stop for drone takeaway food delivery
36 Masks and hand gel sell out as coronavirus fears take hold
37 Catholic bishop warns against yoga and mindfulness in schools
38 Costa living: ‘Move home to Ireland? I’d hate it’
39 Schools face losing hundreds of teaching posts due to dispute
40 ‘I wrote a part for my husband. By the time filming was over, so was our marriage’
Real news has value SUBSCRIBE