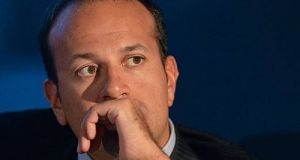 Taoiseach Leo Varadkar: he said he wanted an end to the Northern Assembly’s designation system where members must declare themselves ‘unionist’, ‘nationalist’ or ‘other’

In these momentous days it is easy to miss significant developments. Taoiseach Leo Varadkar should have garnered more attention last week when he stood up in the Dáil and demanded the end of mandatory powersharing in Northern Ireland.

Responding to a question from Green Party leader Eamon Ryan, who called for a “redesign” of Stormont’s “mandatory coalition arrangements”, Varadkar did not agree directly but said he wanted an end to the Northern Assembly’s designation system where members must declare themselves “unionist”, “nationalist” or “other”.

15 Paul Howard: ‘Ross O’Carroll-Kelly was born out of anger’

17 Eat, move, think: What you need to know about children’s health (teenage girls)

18 Fintan O'Toole: The State has never got its head around the pandemic

21 Neil Hannon: ‘It’s like whistling a happy tune as the ship goes down’

22 Q&A: What are the new Covid travel rules and how will they work?

23 Tax relief: Expenses you can claim to try reduce your bill

24 Walk this way: 17 tips for getting the most from your daily lockdown outing

26 Enda Kenny: Border poll is ‘meaningless’ without putting in work on living together

28 Fauci reveals what it was really like working for Trump

30 Q&A: How many people are travelling into and out of Ireland?

34 Oscar Wilde, my grandfather, ‘talked himself into prison’

40 Suzi Quatro: ‘If he’d done that backstage he’d have been singing soprano for the rest of his life’