When questioned by RTÉ reporter Brian O'Donovan US president-elect Joe Biden said he did not want a guarded Border between Ireland and the UK, adding that he had discussed the matter with Boris Johnson and other EU leaders. Video: Reuters 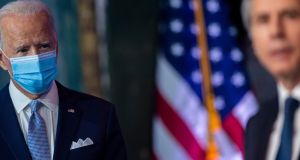 Joe Biden has made his first comments on Brexit and Ireland as US president-elect. After four years of choking on Donald Trump’s word-salad, it is alluring to once again have statements from the leader of the free world that can be thoughtfully chewed over and digested.

Most journalists will be tempted, relieved and a little desperate to resume the civilised parlour game of pre-Trump political analysis. They must remember all things are relative. As Barack Obama’s vice-president, Biden was notoriously careless with language. His 70-word comment this week was an unscripted reply to a television reporter. Subjecting it to Kissenger-era chin stroking might be over the top.

6 My first year as an ex-TD: ‘I looked for jobs, but I didn’t make the grade’

9 Badge of distinction: Meet the first Sikh in the Garda Reserves

10 Ireland’s lost golf courses: What happens when the gates close?

13 Covid-19 infection rate in hospitals ‘out of control’

16 Garda trauma: Sean was a garda for six weeks when he saw his first body

21 Richie Power: ‘To me, Kilkenny’s problem is at the roots’

26 Cold and working from home? How to stay warm without whacking up the heating

27 Covid-19 and travel: Quarantine and increased Garda checks near Dublin airport on cards

28 Behind Her Eyes: Eve Hewson could have found star-making role in Netflix thriller

29 David McWilliams: Why the young are priced out of the Irish economy

30 Meal Box review: From the first bite you will be bowled over

31 Golf club membership in Ireland: What deals are clubs offering?

33 Remote working ‘revolution’ bringing people back to towns and villages