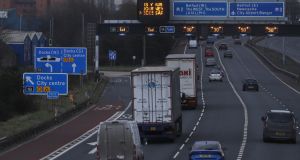 British officials have been speaking anonymously to the Politico website about setting up what one called “the batsh*t House of Cards bureaucracy” of the Brexit deal.

There is some public awareness of the technical and ministerial committees involved, although less awareness that there are 32 of them across three interlocking strands: the withdrawal agreement; the Northern Ireland protocol; and the trade and cooperation agreement. Few people realise there will also be democratic and civic institutions: a Parliamentary Partnership Assembly of MPs and MEPs and a civil society forum that may include representatives of business, trade unions and campaign groups.

7 The Path Ahead: Full facts from Nphet paint stark picture

15 Gordon D’Arcy: No Irish player has inspired in the Six Nations like Seán O’Brien used to

22 Róisín Ingle: ‘Simon Harris is going live,’ my phone says, and I can’t stop myself

23 ‘The type of pornography that my partner watches upsets me’

24 How vaccine laggard CureVac hopes to come out on top

25 Vicky Phelan: ‘I was just sitting in the back of the car bawling’

26 Hotel isolation for 20 states excludes US, UK where cases ‘rampant’

29 Enda McDonagh obituary: A theologian scholar with a towering intellect

33 ‘An accident is not a crime’: Tiger Woods will not face charges in crash

34 Pat Kenny challenges plan for nursing home beside his house

35 Lack of trust causing women to put their lives at risk, CervicalCheck warns

36 ‘People think I either have to be Irish or Filipino, but I can be both’