Most TDs not remotely interested in ending Dáil gender imbalance

Diarmaid Ferriter: Women in Dáil have been quite a nuisance over the decades 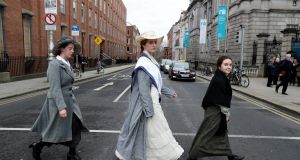 “The Minister has five minutes”. That was the reminder given to Minister for Culture, Heritage and the Gaeltacht Josepha Madigan by the Leas-Cheann Comhairle as she stood up to address the Dáil on Tuesday night to mark the 100th anniversary of the passing of the Representation of the People Act.

This Act began the move towards full female suffrage by giving propertied and educated women over the age of 30 a vote in parliamentary elections.

Madigan duly made her brief statement in order to “reflect on the significant contribution women have made to our country over the last century”.

That, apparently, deserved just five minutes. There then followed contributions from TDs Niamh Smyth, Louise O’Reilly, Joan Burton, Ruth Coppinger, Joan Collins, Catherine Murphy and Catherine Martin, who were thanked by Madigan for “their contributions to this important debate”.

I’m not sure it was a debate, but it does seem it was not perceived as remotely important by most TDs because the women were speaking to an almost empty chamber.

Women in the Dáil, which today is 78 per cent male, have been quite a nuisance over the decades. There were six female Sinn Féin TDs in 1921 and they all voted against the Treaty; one of them, Mary MacSwiney, spoke for hours during the Treaty debates and mocked the slavish “young men” devoted to Michael Collins: “If Mick Collins went to hell in the morning, would you follow him there?”

Such ardency was depicted as hysteria because it was voiced by women and that attitude endured; as taoiseach Albert Reynolds said in 1993 when female TDs sought to interrupt him: “There’s women for you. You cannot even give way to someone who wants to give information”.

There were years when breakthroughs seemed to have occurred for women in politics – the election of Mary Robinson as president in 1990 or the 1992 general election when 20 women TDs were elected, up from 13 in 1989.

But the momentum was stalled. In 1997, an all-party Oireachtas committee on the Constitution noted pointedly: “Even casual observation of the Irish political system reveals that there is marked gender imbalance among public representatives . . . the knowledge, experience and sensibility of women are largely absent from the process through which the State seeks to express the values of its people”.

Despite the significant increase in recent years in the number of female TDs – from 25 in 2011 to 35 in 2016 – it is remarkable how consistent that theme has been for over a century.

In 1908, suffragette Rose Lavery wrote: “Irishmen do not need to have indicated to them the hardship of being governed by those alien to them in temperament, ideals and traditions. An Englishman, they say, can never understand the needs of a country like Ireland. How strange then that all men should be considered gifted with the wonderful power of sympathetic interest which enables them to so easily understand the needs of women.”

Yet women could also be very useful when used to highlight the supposed dangers of the “liberal agenda” in the 1980s and 1990s or when being pilloried and scapegoated like Joanne Hayes during the Kerry Babies saga in order to avoid confronting uncomfortable truths.

Warnings abounded about the “floodgates” opening in relation to access to divorce or abortion and the damage this would do to women.

During the divorce referendum in 1986, pamphlets and flyers were circulated insisting women would lose succession, pension and property rights or be divorced against their will.

Thirty years after these warnings, in 2016, as revealed this week with the release of figures from the Courts Service, 4,100 couples in Ireland applied to divorce. The national average is 87.4 applications per 100,000 people. So much for the bursting of floodgates.

For those who see 2018 as a crucial year for Irish women’s rights because of the forthcoming referendum on the Eighth Amendment, it is worth remembering why divorce is available in Ireland now – because of the success of the campaign to legalise divorce in the referendum of 1995.

It was a wafer-thin victory – a majority of only 9,114 in an electorate of 2.6 million – but it achieved what had not been achieved in the 1986 divorce campaign partly because of a broad political consensus in the Dáil, clarity about what would follow in terms of a legislative framework, a calmer atmosphere during the campaign than was the case in 1986, and a recognition that in the region of 80,000 marriage breakdowns was an Irish reality.

There are obvious lessons there in relation to the campaign to repeal the Eighth Amendment.

It should also be the case that this year, men seeking to speak for or on behalf of women are challenged, as they were 100 years ago, as to why they think themselves “gifted with the wonderful power of sympathetic interest which enables them to so easily understand the needs of women”.