Michael McDowell: Would a Biden presidency be better for Ireland in particular? 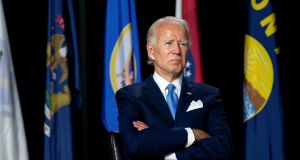 Would Joe Biden’s White House be more interested in Ireland in a benign way than Trump’s appears to be? Photograph: Erin Schaff/The New York Times

There is general agreement in Europe that an end to the presidency of Donald Trump cannot come soon enough for a whole series of reasons, including the re-establishment of multilateralism and an end to the chaotic and aggressive aspects of his international economic policies. After all he seems to loathe the EU. Few now write about his earlier open and enthusiastic support for European politicians who wanted their countries to leave the union. It is easy to imagine that Joe Biden would re-establish a partnership relationship with the EU.

1 One hundred Irish retailers for all your online Christmas shopping
2 What I learned about male desire in a sex-doll factory
3 Covid-19: Pressure over breakdown in tracing system intensifies as State enters Level 5
4 How long can Government afford to keep State pension age at 66?
5 Gym owner plans to defy restrictions and open
6 Bruce Springsteen quiz: How well do you know The Boss?
7 Nearly 400 Brazilians have tested positive for Covid-19 in Ireland, data shows
8 Golf clubs must close under Level 5 Covid-19 restrictions
9 Des Bishop apologises to Traveller community for comments in interview
10 UL study shows young people may have fared better than feared during lockdown
11 Miriam Lord: All test and no trace makes Jack, and heaven knows who else, a very ill boy
12 US election: Trump voters are energised in North Carolina but the state is on a knife-edge
13 Call for financial support for west Kerry if Fungie does not return
14 Brexit: UK and EU agree to intensify talks in rush for deal
15 Varadkar says ‘dumping’ contact tracing problem on GPs ‘unfair’
16 Life under Level 5: What will the next six weeks look like for the State?
17 Suzanne Lynch’s US Election Diary: Trump ‘walks out’ of TV interview at White House
18 Declan Ganley denies Donald Trump trying to swing lucrative 5G contract for Rivada
19 European Union is the new ‘big beast’ on the bond markets
20 Men over 45 years encouraged to exercise for 30 minutes a day
21 Family settle case over death in hospital of 23-year-old woman
22 Much of what we think about Covid-19 is wrong. We need to change the conversation
23 Pope must follow through on support for same-sex civil unions, says McAleese
24 Brexit: UK government suffers heavy defeat over ‘law-breaking’ Bill in House of Lords
25 Micheál Martin to seek suggestions for projects under €500m ‘shared island’ fund
26 Coronavirus still ‘untreatable’ for some elderly nursing home residents
27 ‘My sister preys on people’s weaknesses, and causes nothing but trouble’
28 An Post letter business collapsing under Covid-19 - CWU
29 Toyota Yaris: New supermini is stylish and spacious but faces stiff competition
30 75 reasons to be cheerful – by Mary McAleese, Chris de Burgh, Sinéad O’Connor and more
31 These lemon cheesecake bars are a little slice of sunshine
32 Marquees and fleets of delivery vans: how supermarkets are ready for Lockdown 2
33 The Irish Times view on the killing of Samuel Paty: An attack on democracy
34 Traffic light system for Covid detection to operate at Irish airports in November
35 Six weeks of Level 5: Non-essential shops to close, no visitors to homes and a 5km travel limit
36 A further three deaths and 1,167 new Covid-19 cases reported in the Republic
37 Detached house in Leopardstown exudes architected style
38 What Terence MacSwiney’s body went through during his 74-day hunger strike
39 Residents support elderly man in bid to resist notice to quit apartment
40 Schools should not reopen after midterm unless safety improves, say unions
Real news has value SUBSCRIBE