Michael McDowell: It’s much too soon to dance on Trump’s grave 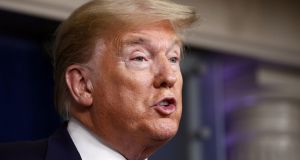 Donald Trump’s dog-whistle encouragement of political thuggery and of racist activists, as at Charlottesville, was calculated and, apparently, not counterproductive as far as his electoral base was concerned. File photograph: Alex Brandon/PA Wire

I don’t intend dancing on Donald Trump’s grave. The simple reason is that he is not dead politically and remains in office. There is absolutely no reason to believe that an egotist of his proportions is minded to accept the verdict of the American people so clearly expressed in the popular vote and in the state-based Electoral College. On the contrary, he has been laying the ground for disputing the outcome of the election for months now.

The simple fact is that he has received the most votes of any losing candidate in US presidential history. Nearly half of the electorate voted to give him four more years in the White House. That fact alone demonstrates that a very substantial proportion of American citizens has a seriously distorted understanding of world politics (if they even care about them) and the role of America in combatting tyrannies and totalitarianism by fostering an alliance among all of the world’s liberal democracies and propagating the values upon which they are based.

9 The Path Ahead: Full facts from Nphet paint stark picture

11 Hotel isolation for 20 states excludes US, UK where cases ‘rampant’

15 Lack of trust causing women to put their lives at risk, CervicalCheck warns

24 ‘The type of pornography that my partner watches upsets me’

26 Enda McDonagh obituary: A theologian scholar with a towering intellect

28 Clonfin ambush can teach us about ethical remembering

30 Michael Harding: I wear a tie to Zoom meetings. It helps me play a role – myself

31 Gordon D’Arcy: No Irish player has inspired in the Six Nations like Seán O’Brien used to

33 Róisín Ingle: ‘Simon Harris is going live,’ my phone says, and I can’t stop myself

36 Vicky Phelan: ‘I was just sitting in the back of the car bawling’

37 How vaccine laggard CureVac hopes to come out on top