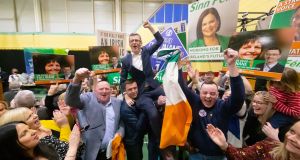 David Cullinane of Sinn Féin: as long as their own representatives bring up the murky past, it is the media’s job to report it. This is not bias. It was not a mainstream journalist who dredged it up by shouting “Up the Ra” as recently as election night or suggesting that they “broke the Free State”. Photograph: Patrick Browne

A diverting feature of recent days is the widespread certainty that Sinn Féin has a divine right to run this country. Mary Lou should reign alone, unhindered by Fine Gael or Fianna Fáil or FFG, as detractors like to call them.

This is exemplified by Patrick, a Formula 1 fan flanked by Irish flags on his Twitter handle: “Leo Varadkar got elected on the fifth count. Michael [sic] Martin on the eighth count. What give them the right to be taoiseach when they are ignoring someone that was elected on the first count with double the quota”.

1 New Zealand marks 100 days without a case of coronavirus
2 10 upgrades that will add value to your home and 5 that probably won’t
3 Are we really facing the death of the office?
4 Gardaí cannot prosecute people who breach midlands movement restrictions
5 Covid-19: One more death and 174 further cases confirmed in State
6 Harry McGee: We are seeing the return of Straight-Talking Leo
7 Meet the Bearman of Buncrana: ‘I knew about Joe Exotic for years’
8 Garda checkpoints in Kildare, Laois and Offaly as restrictions come into force
9 German nudist chases wild boar that stole laptop at Berlin lake
10 Midlands lockdown: ‘Why shut down Offaly and leave Dublin open?’
11 Escape to west Cork: Majestic views, spectacular food and a warm welcome
12 Midlands lockdown Q&A: Firstly, is it a lockdown or not?
13 ‘It is soul destroying’: Kildare hotelier on calling guests to cancel
14 TV Guide: 24 of the best shows to watch this week
15 Inside the dog-trafficking trade: ‘After drugs, it’s guns, then pups’
16 Irish in Australia: ‘We are in for a few hard years’
17 All eyes on Tenet, the spy movie with everything to prove
18 Ross O’Carroll-Kelly: ‘We could be in DeVille’s among people who get where we’re coming from. Literally the Vico Road’
19 The battle to save an Irishman’s eclectic art collection in a London council flat
20 Gardaí investigate after man’s body found in Dublin house
21 Sand-hued cyclepaths changing the face of south Dublin coast
22 Meat plant clusters may be down to softly-softly approach
23 Bar soap vs liquid: Which is better for the environment?
24 Pat Hume: The woman who never gave up
25 All the right angles in garden room that opens up a new view
26 ‘Saudi Arabia is where the opportunities will happen in future’
27 Summer sun: Temperatures set to soar to 26 degrees
28 Scarlet for ya: Paul Mescal does classic Connell in The Rolling Stones’ new video
29 Lionel Messi waves his magic wand again to guide Barça past Napoli
30 Tanya Sweeney: You get a lot of brain space back when you stop hating your body
31 Trump to sign executive orders for coronavirus stimulus
32 A downsizer's garden that makes the most of a shady situation
33 Is it not time we celebrate Ireland and Britain’s closely intertwined culture?
34 Pollan is unique to Ireland so why don’t we eat more of it?
35 Coronavirus globally: US adds over 59,000 new cases
36 What’s the story with dining out under new Covid-19 regulations?
37 Home renovation basics: the costs and how to get started
38 Rory McIlroy puts integrity ahead of glory in US PGA second round
39 David McWilliams: John Hume understood the power of credit
40 Bayern Munich complete formalities with rout over Chelsea
Real news has value SUBSCRIBE