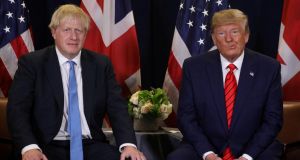 Boris Johnson and Donald Trump: there is a crying need for diplomatic work far from megaphones. Photograph: Jonathan Ernst/Reuters

Like another profession that claims to be the oldest in the world, diplomacy has not always had the best press. Ambassadors were mocked as early as the comedies of Aristophanes in the fifth century BC. But there is a crying need, today more than ever, for diplomatic work far away from megaphones – in the quiet space between competing positions, in the no man’s land of courageous encounter, in the decompression chamber where solutions can be identified and compromises worked through.

Unfortunately, diplomacy is particularly challenged in these turbulent times. Ironically, it has been receiving a particular battering from two countries that have been exceptionally influential in diplomacy, the United States and United Kingdom.