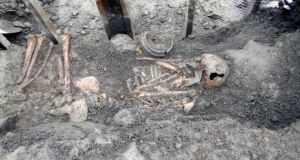 The remains of a Bronze Age body found in Collinstown, Co Westmeath. One geneticist believes Irish Bronze Age farmers were all but wiped out by an Iberian invasion. Photograph: Molloy Photography

Did you know Ireland has the highest concentration of men with the R1b DNA marker? No fewer than 84 per cent of all Irish men carry this on their Y chromosome.

While this marker is also high on male Y chromosomes in parts of Britain, particularly Wales, according to commercial ancestry testing company IrelandsDNA, the high prevalence here may indicate the arrival of a lot of people at a broadly similar time who weren’t prepared to peacefully co exist with the settlers here.

“The high prevalence rates have always perplexed Irish geneticists and historians,” says Alastair Moffat of IrelandsDNA. The firm’s research proposes a new hypothesis. There is already established evidence suggesting that the first farmers, (carrying the Y chromosome lineage of ‘G’, which can be found across Europe) arrived in Kerry about 4,350BC.

According to IrelandsDNA, the so called ‘G-Men’ may have established farming in Ireland “but their successful culture was almost obliterated by what amounted to an invasion, even a genocide, some time around 2,500BC” (the frequency of G in Ireland is now only 1.5 per cent). “There’s a cemetery in Treille [France], where ancient DNA testing has been carried out and almost all men carry the ‘G’ marker but the women don’t,” says Moffat. They carry native/indigenous markers. This strongly suggests incoming groups of men. Because the R1b marker is still so prevalent in Ireland and is also frequently found in places like France and northern Spain we believed that around 2,500 BC, the R1b marker arrived in Ireland from the south.”

Moffat admits it is just a hypothesis but cites connections which lead to this theory. “The first signs of farming in Ireland were found on the Dingle peninsula in Kerry, which suggests people coming from the south,” he says. “If you look at Lebor Gabála Érenn or The Book of the Taking of Ireland [a Middle Irish collection recounting mythical origins of life in Ireland dating from the 11th century] most of the invasions come from the south.”

The southern migrants referred to by Moffat were the Beaker people, originating from Iberia. It has also been suggested that it was they who may have brought Celtic languages up the Atlantic coast.

Moffat cites archaeological evidence, from the Copper Age, to suggest this movement. “Evidence for the beginning of the Copper Age in Ireland is also found in the south, particularly Ross Island in Killarney, where a tremendous complex system of prehistoric mines exists. It’s clear that the copper was exported.

“How did these new people impose themselves in such a big way,” he asks. “It has to have been through conflict. The early people were farmers so they invested generations of effort in improving the land. When these new people show up they must have used violence to shift the ‘G-Men’. The frequency of ‘G-Men’ is tiny in Ireland. Compare the statistics: 1 per cent versus 84 percent.”

Not everyone is convinced, however. “What they [IrelandsDNA] are suggesting is based on a very strong interpretation of a small piece of a genetic pattern,” says Prof Dan Bradley from the Smurfit Institute of Genetics. “There’s no real scientific evidence to warrant the use of terms like ‘genocide’. You can’t link modern genetic variation securely through archaeological strata without ancient DNA testing also. You can certainly have conjecture and there are indeed ways of looking at the time and depth of these things. But they have very wide margins for error. The reality is I don’t think we can securely place any of these DNA marker patterns in time without ancient DNA testing.”

Ancient DNA testing has been ongoing in Ireland for the last two years by Bradley in Trinity and Prof Ron Pinhasi in the UCD School of Archaeology, who is involved with a large project of ancient DNA testing throughout Europe.

“I don’t know of any time in history where a culture came in and completely wiped out another,” says Pinhasi. “You don’t see total wipeouts, unless there is reason for a population to become extinct, like massive climate change. But we have no reason to believe Bronze Age farmers became extinct this way.

“Sure there were a lot of population movements and mixing going on at this time. That’s why modern people don’t look like neolithic people, genetically speaking, but it would have had minimal impact on the gene pool” he says. “You’re not going to have hundreds of thousands of people suddenly coming from Spain but you would definitely have had smaller groups coming in boats. Plus there’s no archeological proof of any massive warfare or battles here at that time.”

The mapping out of ancient genetics of populations from 45,000BC to the Bronze Age, now under way, may very possibly reveal many misconceptions about our past.