Kingdom Come (and Gone) – Frank McNally on holidays in Kerry, the myth of Tír na nÓg, and the demise of Big Phil 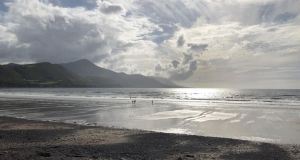 The only part of my stay-in-Ireland holiday that coincided with Phil Hogan’s now infamous itinerary was a pitstop in Adare on the way south. Not that the Limerick town had yet featured in the political saga. The commissioner’s account of his movements was still more or less on the fairway at the time, or just off it, in the light rough. But in passing, I did point out Adare Manor to my younger passengers and enjoyed a minor feeling of vindication when it later made the news.

Then we went looking for a café and found a cosy place among the thatched cottages on main street.

Unfortunately, they couldn’t fit us inside. Covid-reduced capacity was already exhausted. So instead, we had to take refuge in the small marquee out front, keeping our jackets on, even though it was August.

The weather forecast for Kerry was not good.

On my iPhone, meanwhile, people on Twitter were speculating about Big Phil in the context of that great Irish political question – whether it would be better for the Government to have him inside the tent, doing you-know-what, or outside.

There was no sign of Big Phil in Adare while we were there.  But as we huddled in our damp marquee, a gloomy sky was threatening to supply the other part of the metaphor.

I’ve never seen so many rainbows in a week as we did in Kerry. On the plus side, this meant that the rain did stop frequently and that the sun made enough appearances to provide dramatic light effects.  Even at its most violent, the weather was entertaining. At the height of Storm Francis, for example, I went for a barefoot run on Rossbeigh Strand – a vast expanse of beach near Killorglin – and it was a breathtaking experience, in every sense.

Alas, these days, it is also a reminder that, outside Tír na nÓg, nothing is permanent

Rossbeigh has ancient mythical associations. It is said to have been the place from which Oisín and Niamh rode to Tir na nÓg on a magical white horse.

Alas, these days, it is also a reminder that, outside Tír na nÓg, nothing is permanent.  I’m not sure if the strand could ever have been “up to six miles long”, as one tourism website claims, but it’s definitely not that long now.

A few years ago, in another storm, the sea swept away a huge chunk of dunes. The rest of the fragile peninsula is now also under threat. With the tide out, I was able to run as far as a small island that stands between Rossbeigh and Inch (the even longer peninsula on the opposite side of the bay). But until recently, that island was the end of the beach. Now it’s some 500 metres from the mainland.

While touring the Ring of Kerry – speaking of storms – we also visited Cahersiveen, which is surely implicated in the latest list of European storm names, published since. No doubt there are little Sadbhs all over Ireland, but the birthplace of Daniel O’Connell is the only town I can think of to have enshrined one in its name.

There’s even a Scoil Saidhbhín there, which may be apt, because when Storm Saidhbhín hits Europe sometime next year, it may force a crash course in Irish phonetics for weather presenters on BBC and Sky.

Cahersiveen is also unusual in having a church named after a secular figure – O’Connell of course – even though his main Irish home was around the other side of the Ring, at Derrynane. We stopped there too, later, and amid the magnificent scenery with which the Great Liberator was so smitten, there was another political metaphor that may have served him well in life.

On one side of the series of little coves and beaches in front of his house, families frolicked safely in the water.

On the other, signs warned of dangerous currents that could sweep you away suddenly.

Even the rocks had painted warnings, “Do not swim here”.

Mind you, Phil Hogan’s problems arose from touching land, not water. By the time we left Kerry, he too had been swept away and, fresh from Rossbeigh, I was struck by the similarities between his fate and that of Oisín.

Maybe comparing the European Commission to Tír na nÓg, or Ursula von der Leyen to Niamh, would be stretching things. But Big Phil’s life on another mythical off-shore paradise – Hy-Brussels – seems now to have been equally enchanted. Then he made the fatal mistake of setting foot on Irish soil again, repeatedly. Whereupon the aura of invincibility fell away, he felt himself suddenly ancient and decrepit (golf dinners will do that at the best of times), and the land of eternal expenses was lost to him forever.