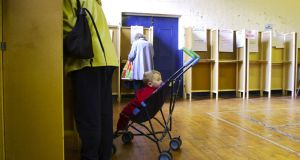 “Holding a Saturday election seems enlightened, presuming that plenty of promotion is invested in the change; the fact it’s a weekend is no guarantee that people will prioritise the vote but it removes a lot of excuses.” File photograph: Frank Miller

There was a time when an election felt like some great anarchic festival. I grew up in a political household where an early arch enemy – a mild but irritatingly persistent schoolteacher – occupied a civilised lair a few miles cross-country. Our campaign HQ, by contrast, was above a pub. On occasion, this had unfortunate consequences, such as a morning canvass where a voter opened the door a tad too eagerly and our local guiding light fell through it, flattening the voter. Instead of an outraged call to the Westmeath Examiner (the twitter of the day), the injured party dusted himself off, fetched a fairly poisonous pick-me-up from the hayshed for the visitors and himself and sent us on our merry way with five number 1s (he vowed tipsily) in the bag.

Now, let me be clear (a phrase you’ll be hearing a lot of in the next few weeks along with “a very positive reaction on the doorsteps” and “that’s not what we’re hearing on the doorsteps”), alcohol abuse was never funny. But a dreary air of impermeable political messaging and the simultaneous terror of and hunger for media coverage render campaigns into barren door-knocking. At all campaign HQs, the scorched earth of Verona Murphy’s byelection is still sending smoke signals: Do Not Stray off Message.

2 Long Covid in children: New data is cause for concern, scientists say

3 Miriam Lord: The Bisto Kids get a taste of their own Davy gravy

7 Irish Times view on the restless state of unionism

12 We said: ‘This is life and death, and we owe the Irish people’

17 Finn McRedmond: Wokeness is dying, another victim of the pandemic

18 Davy board to search for other potential cases of wrongdoing

23 ‘I don’t even know when I was born’: Scale of illegal adoption is hard to take in

25 Technology really can be stranger than fiction at times

29 ‘My husband is unemployed. Where will he go if I leave him for my business partner?’

32 Irish in Australia: ‘It’s scary here, not able to visit home at the drop of a hat’

36 Róisín Ingle: I told my children about my new handsome friend. They accused me of cheating

38 The Northern Ireland protocol: ‘All shades of unionist are really angry’

40 How Enter The Dragon became a martial arts phenomenon