Now is not the time for a Border poll 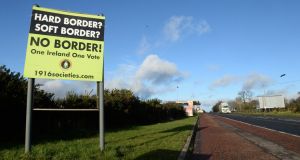 According to a recent poll only three in 10 of English people would be upset if Northern Ireland opted for reunification. File photograph: Dara Mac Donaill / The Irish Times

It’s an odd conundrum. About six out of 10 English people still think of themselves as more British than English – yet only three in 10 of them would be upset if Northern Ireland opted for reunification. Worse, nearly four in 10 aren’t bothered about it either way.

The Sunday Times’ State of the Union polls are not the first to intimate that many English people like the notion of Britishness yet are fairly indifferent to the fate of its few remaining, visible bits.

11 Kazuo Ishiguro: ‘I have to be careful to guard against genius syndrome’

12 Diarmaid Ferriter: We are being infantilised on Covid-19 by an immature Government

13 Relax, boomer: Gen Z and the millennials have turned on one another

15 Moses Farrow: ‘I felt inherently like I was a bad kid. The abuse at home reinforced that’

17 Covid-19: Ireland could be ‘close to normal’ by end of year, says Dr Ronan Glynn

19 The outlook for vaccination is better than it seems

20 How many masks should you wear while out and about this weekend?

21 North’s status under Belfast Agreement is an inconvenient truth

24 Public support for lockdown will nose dive once vulnerable vaccinated

27 ‘Ireland is a great country, but we can’t help ourselves being nasty to people sometimes’

30 The Path Ahead: Full facts from Nphet paint stark picture

38 The feud between Sturgeon and Salmond could derail Scottish independence