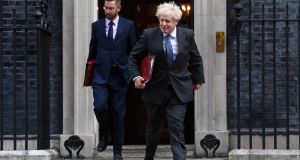 Simon Coveney’s icily authoritative BBC interview on Sunday smashed a BBC norm. He minced the longstanding notion that any media outlet striving for balance must give equal weight to both sides. “You seem to be suggesting that there are two sides that are equal in this disagreement. There aren’t. There is one side that is breaking an agreement that was signed by both,” he said. That surely shook up elevenses in the shires.

Presenter Andrew Marr’s job was to articulate the “other side”, putting the questions that the endlessly vox-popped market-stall holders of Grimsby would want asked if they ever felt the urge to watch a politics show at 10am on a Sunday. His strategy was to frame baseless accusations as serious questions. “Are you seriously suggesting the EU would actually blockade goods going into Northern Ireland because that, on the face of it, is what is proposed by Michel Barnier?” he asked with breathless conviction, bedding in the notion of an EU out to starve the suffering people of Northern Ireland.

1 Let coronavirus spread through under-60 population, Dáil committee told
2 Miriam Lord: Let’s call a spad a spad – this Government has woeful timing
3 Air travel never going ‘back to way it was’
4 Ellen DeGeneres apology: Why do her words sound hollow?
5 Ireland’s top earners ‘do not see themselves as rich’, study finds
6 Dublin farmer discovers overnight rave on his land
7 Gordon D’Arcy: Saracens showed again they have the template of how to beat Leinster
8 Why are men still explaining things to women?
9 Further 334 confirmed cases of Covid-19 reported, 174 of them in Dublin
10 Obesity linked to hospitalisation and ICUs for Covid-19 patients
11 US senators to consider Trump’s supreme court nominee
12 Further restrictions expected for Dublin if Covid-19 infection rate does not stablilise
13 Our neighbour says he has permission to build on our boundary wall. Can he?
14 Mary Berry’s Ireland visit: here’s what she did and what she cooked
15 Should I switch bank now with Ulster Bank at risk of closing?
16 Australian police chief says ‘dangerous’ Irish man lied on visa application
17 Brian Boyd: Rave on, Van Morrison, rave on thy holy fool
18 Sitka spruce plantations ‘affect your mental health’ – Leitrim farmer
19 Eileen Flynn: ‘As a Traveller woman, I was undermined in the maternity hospital’
20 The secret to an airy and light scone with a pillowy interior
21 Covid response leaves no surprise that tensions are rising across school system
22 Unions quit Low Pay Commission over proposed minimum wage increase
23 The far right rises: Its growth as a political force in Ireland
24 Róisín Ingle: We’re in a different pandemic place now. Nobody’s quoting Seamus Heaney any more
25 Should you consider a postgrad during the pandemic?
26 ‘How happy he was’: Candid David Bowie photographs by his childhood friend Geoff
27 Why working in an office beats living at work
28 Visitors from non-green list countries a Covid-19 risk, Shortall warns
29 Government to consider reversing cuts to Covid-19 payment
30 McEntee pledges to release ‘as appropriate’ records on 1970 arms trial
31 Solidarity in suppressing Covid in achievable - but let's not treat people as children
32 How to manage your children’s screen time
33 Life in Level 3: What is happening under the new restrictions in Dublin?
34 Katherine Ryan: ‘I definitely felt shame as a single mother, the way people word things’
35 Homeless man died after being stabbed 183 times in Dublin park, trial hears
36 Man admits sending dozens of letters falsely accusing relative of child abuse
37 Syrian refugee injured in Beirut seeking visa to attend Trinity
38 Fintan O'Toole: Ireland's young and working classes are in the Covid-19 firing line
39 Citywest Covid-19 facility transformed into pop-up allergy clinic for children
40 Three Covid-19 mistakes Ireland urgently needs to learn from
Real news has value SUBSCRIBE