Kathy Sheridan: Is Stephen Donnelly out of his depth as Minister for Health?

Despite his armour-plated confidence, the Fianna Fáiler fails to convince 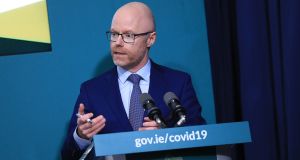 Minister for Health Stephen Donnelly: Stratospheric levels of self-confidence are required to stride into the hottest job in Government mid-pandemic, with no ministerial experience of any kind and both your secretary general and chief medical officer vanishing out the door. Photograph: Julien Behal

If Stephen Donnelly is fond of marking anniversaries, he surely raised a glass on Sunday. Four years in Fianna Fáil. Many words of sympathetic coverage in a Sunday newspaper suggesting caddish attempts by colleagues to undermine him. Four years since he abandoned the Social Democrats –the party he co-founded – to become an Independent again, then to join the party which he had catapulted tons of excrement at since his election as an Independent in 2011.

As a simple Fianna Fáil TD in February 2017, he had only his constituents to worry about and used his Sunday newspaper column to explain why he was now on his fourth iteration as a TD in six years. Responders were mean. That evening he tweeted : “Kids are sick, Scotland won, and everybody hates me. Not gonna lie, I’ve had better weekends.”

7 Spring clean: 13 ways to spruce up your home – with or without a tradesperson

12 Wood burning stoves: The inconvenient truth about the homely heater

15 David McWilliams: Why Ireland will recover faster than others

16 Kate Winslet: ‘I shouldn’t have worked with Woody. I’ll always grapple with that regret’

17 Six Nations: Time for Ireland to deliver in style against Italy

18 Michael Walker: Why Marcelo Bielsa is manager of the season so far

24 LeBron James tells Zlatan Ibrahimovic: ‘I will never shut up’

25 Jennifer O’Connell: The Government doesn’t trust us and it’s mutual

27 Paul Flynn: Three satisfyingly simple dishes that anyone can cook

31 ‘We can’t just dump our rubbish in the gorden. It’s the Vico Road – there’ll be meetings’

39 Blackrock cottage beside a babbling brook and parkland for €725k

40 Gatland considering Jersey as base for Lions ahead of series