Why rush into an unsatisfactory arrangement while Covid-19 threat remains? 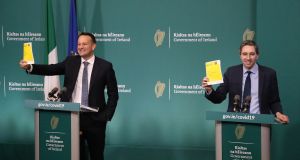 More than four out of five of us believe the current Government is doing a good job. Photograph: Nick Bradshaw

Which images will linger in the mind when it’s all over?

Donald Trump whipping up the MAGA crowds, dismissing the virus as a hoax perpetrated by the Democrats to unseat him, juxtaposed with refrigerated white lorries loaded with New Yorkers’ bodies? The UK prime minister’s enthusiastic endorsement of hand-shaking “continuously” amid No 10 discussions about “herd immunity”? Brazilian president Jair Bolsonaro spreading such egregious misinformation that Twitter had to remove two of his tweets? Viktor Orban leading Hungary into dictatorship under cover of pandemic emergency measures? The video of a desperate Chinese doctor pleading to be heard alongside news of his death from the virus he tried to warn us about and the Chinese Communist Party’s “solemn apology” to his family?