Controversial gathering daft and stupid but hardly a hanging offence 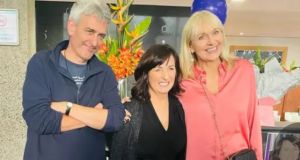 For a day-tripping Martian, the volcanic public reaction to pictures of a few prominent RTÉ people at a going away for a reception supervisor would have to be reassuring.

In early reports flashed back to Mars HQ, our visitor would attach pictures of large, grinning humans leaning into each other while wearing curious mélanges of work-wear.

Being aware of Level 5 lockdown, he would marvel at such daft behaviour but deem the reaction reassuring. Mainly because, as an out-of-towner with no axe to grind, he would infer that when these earthlings were not busting pandemic regulations in a TV lobby, they must enjoy a stratospheric level of public trust. Otherwise why the fuss?

He would be right. Three out of four Irish people trust RTÉ. That figure is from a June survey of trust in the news carried out by the Reuters Institute for the Study of Journalism and the University of Oxford. (No harm to note that about the same number say they trust The Irish Times). In fact nearly half those surveyed feel they can trust most of the news in Ireland most of the time, compared to an international average of 38 per cent, or 28 per cent in the UK and 29 per cent in the US.

The effort to maintain high standards in an industry subject to relentless scrutiny over decades of near lethal disruption might be something to admire. In any event, RTÉ rarely slips up badly.

There are so many unanswered questions. Was the 'event' really 'impromptu' as claimed? Will the shadowy 'organiser' be unveiled?

Now imagine our Martian has been scrolling through reports and comment on the broadcaster’s current debacle. Reaction to the Sun’s expose (culled from a jolly picture feature posted on an RTÉ pensioners’ website) is keeping him awake.

He is fascinated by the succession of RTÉ current affairs journalists interrupting their own shows to deliver a remorseless series of wholehearted, no-ifs-or-buts apologies; by the steely determination of them all (including Liveline) to report and analyse their own behaviour as a major scandal.

It is an effort that invariably culminates in the fruitless demand (until Monday, a lifetime in news) for RTÉ spokespeople to present themselves for interrogation. And all capped by news of a startlingly swift, well-publicised Garda inquiry – or seemingly capped at least, until the chairwoman of the Oireachtas Committee on Media, Tourism, Arts, Culture, Sport and the Gaeltacht announced on Monday that RTÉ was to be hauled before an Oireachtas inquiry.

Short of engaging the FBI, an Oireachtas inquiry should crown it. There are so many unanswered questions. Was the “event” really “impromptu” as claimed? Will the shadowy “organiser” be unveiled? Will their forensic questioning reveal whether the “organiser” is the same as the one who forced all those grown-up, experienced media professionals to remove their masks and knowingly push in for a shot with the departing colleague? Were they framed? Who planted the flowers and balloons?

Level 5, no masks, no attempt at social distancing, shoulder to shoulder for bafflingly ill-advised photographs. Daft, stupid, particularly for people steeped in pandemic detail, numbers and regulations. But the send-off hardly fitted the image of a long-planned bacchanal organised by some hand-rubbing Maleficent with glittering stars and champagne flutes.

What we saw were scenes familiar to any of us who have ever worked in an office: an email reminder that so-and-so is about to leave the building; long-time colleagues in work gear and heavy work mode rush down for a quick goodbye; a few balloons, cards and flowers in the background as retiring colleague prepares to go out the main door (clearly visible in pictures). And in normal times, a standing invitation to the pub for those who can.

The problem, of course, is that these are not normal times. At risk of pre-empting some important opinion polling on the subject, I’ll guess that the country is split 50/50 on the issue and that many people are rightfully unhappy at the carelessness on display.

Dozens of agendas spin into play when RTÉ drops its guard. In good times, routine gripes include presenters’ pay levels, hours of work, perceived self-adulation, level of “cosiness” with Blueshirts, suspect flirtation with Communists/Fianna Fáil/Catholics back in freshers week circa 1990. Not to mention the decades-old misapprehensions among many politicians about RTÉ’s purpose and obligation to hold them to account.

Since these are the bad times and the pandemic is the context, add a thousand flocks of political chickens coming home to roost over repeated questions about the Bobby Storey funeral and the Sinn Féin close-ups and what is routinely described as the media “witch-hunt” against aggrieved “golfgate” participants.

The word “disproportionate” has been liberally sprayed around these parts since its use in the Denham report, and for good reason. The carefully chosen adjective was instrumental in saving Séamus Woulfe’s Supreme Court seat. A surprising number of people who used it to defend Woulfe or make a case for Phil Hogan are now rather pleased at the prospect of RTÉ bosses and presenters in personal tangles with Garda investigations and Oireachtas inquiries. It’s an odd take.

The degree of revisionism about golfgate only a few months on is fascinating. It’s worth remembering that what diminished both Woulfe, a man at the pinnacle of the judiciary and Hogan, an EU commissioner, was not the lengthy journeys taken amid soaring public health anxiety to a long-planned 80-plus Clifden hotel dinner; it was how disastrously and disdainfully those men of the world handled the aftermath.

One of the problems of the pandemic is that we haven’t yet learned how to apply proportionality and proportionate sanctions for those who breach regulations. In the meantime, we rely on shame to do the job.

How much is enough?