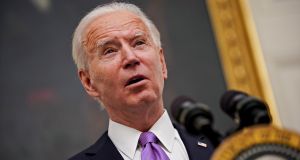 US president Joe Biden’s cabinet is more or less evenly divided on gender. One in five of his secretaries are black; one in 10 is of Asian descent; 15 per cent are Latina. Photograph: Al Drago/POOL/EPA

Five decades after the sexual revolution, who would have predicted that the inauguration of a 78-year-old white man – someone whose chief promise is that he will be the boring president his country needs – would come as a day of such relief and celebration for women?

Joe Biden’s inauguration speech struck all the right notes about healing and unity, a word he mentioned or alluded to at least 10 times. But in keeping with the undertaking that he will be a president you will barely need to know is there, the day belonged to the women of the 46th inauguration as much as it did to him. The swearing in of vice-president Kamala Harris, the first woman and the first person of colour to serve in the role, by Sonia Sotomayor, the first Latina on America’s highest court, and the performances of Lady Gaga, J-Lo and Amanda Gorman, landed like a powerful full stop to the past four years.

Those were four years, it’s worth reminding ourselves, in which women were continuously sexualised or sidelined by the administration; their reproductive rights threatened; a man accused of sexual assault was appointed to the US supreme court; and babies were taken from their mothers at the border. And all the while, the preening, lying, self-declared p***y-grabber in the White House peddled a narrative in which the real victims were those whose freedom to be racist, sexist and nativist was under threat.

As the words of Gorman, the youngest poet laureate in US history, fizzed in the morning air like a chemical reaction, the whinger-in-chief was being spirited away to Mar-a-Lago, his farewell note the rousing promise that it’s fun to stay at the YMCA. Yes, let’s hear it for boring Joe Biden.

Biden set about immediately fulfilling his pledge that his administration would look “like the country”. His cabinet is more or less evenly divided on gender. One in five of his secretaries are black; one in 10 is of Asian descent; 15 per cent are Latina. The names of the people who will determine his economic policy are Janet Yellen, Cecilia Rouse, Katherine Tai, Gina Raimondo and Isabel Guzman. Not a Bob or a Don in sight.

There are people who say it shouldn’t matter whether a country’s politicians look like the people who voted them in, but they’re often the ones used to seeing their own image reflected back to them. In reality, gender and colour have always mattered; male and white were the starting points.

The Biden inauguration and the fallout from the publication of the mother and baby homes report here were reminders that we’re still a depressingly long way from having politicians who “look like the country”. Women make up 50.4 per cent of the Irish population, and 22.5 per cent of the Dáil. The 2019 local elections saw 54 people of migrant origin run for local office, and nine elected.

They included Dublin Lord Mayor Hazel Chu, born in Ireland to Chinese parents, who had to speak out again on Friday about being targeted by far-right protesters at her home. She has concluded the sustained abuse she gets is not because of her policies, since other Green Party councillors don’t get it. “If it comes down to one thing – you don’t like a woman of colour in this office – then we have a huge problem,” she said. We can roll our eyes at the 74 million people who wanted Trump to have another spin, but let’s not be too smug about it.

No country can move forward without repairing its past. And there can be no meaningful progress until it is represented by people who actually represent it, in all its diversity

Significant social progress has been made in Ireland in recent years, despite our lopsided representation. But there’s no room for complacency in a country where we still hide away people whose existence we prefer not to think about. In the past, we used laundries or mother and baby homes or ferries to England or unmarked graves. Now we use direct provision centres and hotel rooms and sometimes actual prisons. And we still deny those who survived these systems basic rights, such as information about their own past.

The mother and baby homes report, for all its flaws, was a useful look back at a society when, to paraphrase Frank Underwood (and not, as far as I know, Oscar Wilde), everything was about sex except sex; sex was about power and commerce. The function of women was to oil the wheels of the conservative, agrarian society, and keep it fed, clothed and, above all, respectable. Women who jeopardised that – the much-whispered about wayward women; the fallen women; the girls with a bad name; the silly, stupid girls – not only damaged their family’s standing, they undermined the foundations of society. Society’s solution was to remove them from circulation.

The report struggles to explain the mechanisms by which this happened, the unspoken collusion that facilitated these women being simply swept up and put away. It flounders on the mental reservations required to make sense of the statements that no one was “forced” to enter a home; most simply “had no alternative”. One legitimate criticism is that it went too far in blaming wider society, specifically “the fathers of their children and their own immediate families”, and not far enough in holding the church or the State to account. But it is not possible to separate the prevailing social mores from the society that determines them; or its political and spiritual leaders from the people they serve. And that is why diversity matters.

The lessons of America are that, as Gorman said, “the norms and notions of what ‘just’ is, isn’t always justice”. Progress is slow, and the slide backwards can happen in a blink. No country can move forward without repairing its past. And there can be no meaningful progress until it is represented by people who actually represent it, in all its diversity. Yes, let’s hear it for boring Joe Biden.