Irish income tax system is skewed, uncompetitive and too complex

Someone earning 2.8 times the salary of a person on the average wage pays 5.6 times their tax 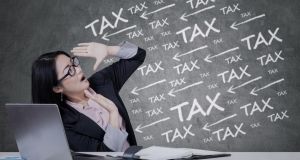 The personal tax system of any country has a few important jobs to do. It should raise money for public services. It should play a role in redistributing income, ensuring those who earn most pay most.

And it should do both those jobs in a way that causes the least harm to economic growth and competitiveness.

Ireland’s first Income Tax Reform Plan was published last week, so now is a good time to ask if the personal tax system is really fit for purpose.

First of all, Ireland’s income tax and USC regime contributes over 40 per cent to the Exchequer yield, not including PRSI. Some 29 per cent of income taxpayers are actually out of the personal tax net entirely so the remaining two-thirds are paying the total personal tax yield, which is €18.3 billion.

To complicate matters further, the definition of what constitutes income for PAYE purposes is not the same income for USC, and nor is it the same for PRSI. Employees are treated differently to the self-employed.

So in terms of assessing whether our personal tax system best serves the needs of our country and its people, and whether the current system is sustainable, we must look at the key needs that exist, starting with human capital.

Skills and talent are in scarce supply, and there is increased demand for them internationally. In a post-Brexit world, where human capital is a driver of growth across all businesses, Ireland’s competitiveness and attractiveness on personal tax is essential.

While dealing with the immediate needs of our economy, we have to remain mindful that changing demographics will bring further pressure to bear on revenues and the tax system.

Such demands require us to consider the following: from a growth and productivity perspective we cannot afford to push taxpayers into such high levels of personal tax that it is no longer an incentive to earn more, produce more or secure a promotion.

We are in danger of disincentivising productivity and output, with repercussions for growth in the workplace and in the economy.

As a nimble economy in which start-up businesses, expanding enterprises and international companies are facing greater competition for globally mobile talent, it would be detrimental to damage our ability to attract skilled people.

We are now ranked 66th in terms of the effect of our tax system in attracting talent.

The leaders of State agencies charged with job-creation have raised concerns on personal taxes in recent times. So too have investors and business leaders.

We have to ask if it is really sustainable to continue to draw on a small group of taxpayers who already contribute such a sizeable chunk of the income tax yield? We must also ask if it would be better to have broader participation in our tax system?

Much was asked of the personal tax system in the past 10 years and it was left with much work to do out of necessity. In the process it become skewed, uncompetitive and complex.

As our personal tax regime becomes more important in the new competitive landscape, it is time to both reflect and review. Mary Honohan is president of the Irish Tax Institute

4 Laura Whitmore: ‘I’ve had enough of being trivialised and gossiped about’