In war and peace, Martin McGuinness’s commitment was total and pivotal 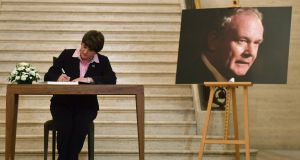 Martin McGuinness was the most significant player in Northern Irish politics, for bad and then good, over the course of the past half-century. The scale and duration of his career means there are few commentators or politicians North or South who have not met him or had some dealings with him, who had to reflect on – and in many instances alter – their views of him.

McGuinness was a hero to his own generation of Republicans as well as an iconic figure for a newer generation of Sinn Féin politicians. The later are particularly sensitive to any criticism of McGuinness. Such is their fervour that they take any attack on his legacy personally.