It was no coincidence that Trump discussed the weaponization of space at a historic-for-all-humankind launch (“we’ll soon have the greatest weapons ever imagined in history”), whilst simultaneously withdrawing from the World Health Organization 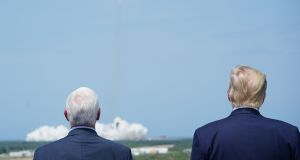 US Vice President Mike Pence and US President Donald Trump watch the SpaceX Falcon 9 rocket carrying the SpaceX Crew Dragon capsule, with astronauts Bob Behnken and Doug Hurley, lifts off from Kennedy Space Center in Florida on May 30, 2020. (Photo by MANDEL NGAN/AFP via Getty Images)

“Let’s light this candle”, the final Earth-constrained words of NASA astronaut Doug Hurley on Saturday, referring to the imminent ignition of the SpaceX Falcon rocket underneath him. These same words, fittingly nostalgic, were used by astronaut Alan Shepherd on May 5, 1961, when he launched on Freedom 7 to become the first American in space.

The joint NASA and SpaceX Demos-2 launch at Cape Canaveral on Saturday marked the beginning of a new era of American Spaceflight. It is difficult to put into words the deeply meaningful nature of the launch to those involved in human spaceflight and exploration, but the meaning to those outside of the space program was clear. As was widely reported, this was the first launch of “American astronauts, on an American rocket, on American soil” in nearly a decade, shown live on “Launch America: Mission to Space Live”. The space industry may have been born on international competition, but there is no doubt that it owes its growth to international cooperation and now thrives due to its ‘international, interdisciplinary and intercultural’ nature. The nationalistic messaging, compounded by the timing of such messaging, left many space enthusiasts feeling a complex range of emotions.

It wasn’t just the branding that was new to this launch- President Trump, in a now familiar style, broke with launch day norms and did what has not been done since the early days of the Apollo mission by being present at Kennedy Space Center. Eager to attach his administration to the success, he made two separate trips to Florida in the same week that the US passed 100,000 deaths due to the COVID pandemic and as civil unrest spreads across urban America.

Trump’s victory lap speech was a cut-and-paste of every other speech. But as similar as this speech was in its deliriously false nature to the others, Saturday’s brought about new feelings of anguish. Against the backdrop of racial discrimination and police brutality, it was nearly impossible to not see Trump’s speech as anything but glaringly racist: he used his podium to stoke anti-Democratic feelings by declaring that the Obama administration was to blame for the degradation of NASA. [Fact check: President Bush canceled the Space Shuttle program that he often refers to, not Obama]. To those in the industry, it is in no way unclear that both the first black US President (Obama) and the first black NASA Administrator (Charles Bolden) were responsible for re-imagining NASA and that their work created heightened urgency for restructuring the industry. As black people protest for basic human rights, Trump deployed the national guard while taking credit for the work that was painstakingly started by two visionary black leaders.

Trump however did speak positively about Elon Musk, highlighting him as someone who “truly embodies the American ethos” and praising him for starting SpaceX. As an immigrant, Elon Musk was able to create SpaceX only by taking advantage of immigration policies that no longer exist. Due to immigration reforms by far-right and anti-immigration White House Advisor Stephen Miller, these comments will appear ironic to the many highly specialized rocket scientists who have been forced out of the US space programs due to immigration.

The nationalistic display may have been uncomfortable, but for once, Trump was not confusing in his strategy. It was no coincidence that Trump discussed the weaponization of space at a historic-for-all-humankind launch (“we’ll soon have the greatest weapons ever imagined in history”), whilst simultaneously withdrawing from the World Health Organization during a pandemic and delaying G7 meetings during an economic meltdown. The message is clear- America First and America Alone.

Whilst there may be a strategy in place, Trump’s America First space dream has been executed haphazardly at best as many NASA staff, who are government employees, have become frustrated at the lack of government direction. After three years of this administration, it is looking increasingly likely that the national space strategy roll-out will follow those before it: a feigned narrative of ‘small government’ with overwhelming privatization to key allies. Despite his Obama criticisms, Trump has, overall, increased NASA spending. He hugely increased NASA funding for the projects he likes such as space exploration since it emboldens his nationalistic tendencies, and massively underfunded what he doesn’t like- science and climate research which does the opposite.

To be clear- the privatization of space and the rise of commercial space activity is overall a very positive endeavour for the US, but its vision and strategy must be attributed to Obama, not Trump. However, there is a slight but very important subtlety that goes beyond Trump’s comprehension between creating space capabilities and strengthening national identity and pride, and what Trump aims to privatize during his tenure is the latter. National pride involves both admiration and stake holding-the feeling that one has some kind of share in the achievement or an admirable quality. Further ingraining racial exclusivity and weaponizing NASA’s efforts does not lend itself to such an accomplishment. Like many important government functions, this important task of creating vision and pride will be privatized. But to whom?

Merely two weeks ago, Elon Musk broke national scandal by threatening to go against California rules and re-start his Tesla operations in California early, and was endorsed strongly by Trump who encouraged him to “Free America!” by reopening his 10,000 person strong factory. Despite such a visceral reaction to his actions by the American people, astronauts Bob Behnken and Doug Hurley were brought to the launchpad in a Tesla, where it became clear that alongside education, healthcare and essential infrastructure, the government’s role in creating important sources of national strategy and pride rely on the will of the billionaires who profit from producing the same activities.

The reported feelings around the launch of Demos-2 mission remain mixed; on the one hand, such an incredible feat of human creation should be celebrated. Many, including myself, shed a tear upon lift-off and the fruit of an industry’s long-spent labour had come about. But simultaneously, it is difficult to align national and industry pride alongside the same dimensions created by an egomaniacal billionaire and President who, whilst leading NASA, also incites violence against African Americans- many of whom have been pivotal to NASA’s very success.

Societal organization is as complex as human emotion; we can both create and destroy at alarming speeds, we can be hopeful and fearful, proud and ashamed. Whilst I do not believe that, as many tweeted , “Elon Musk is the hero America needs”, I look at what he has created as a multiplicative force for American exploration. But I also watched Leland Melvin, an African American astronaut who live presented the events on Launch America at Mission Control in Houston as protests grew outside and wondered how torn he must have felt that day.

Sinéad O’Sullivan worked on NASA’s human spaceflight programme and is now a Sainsbury Management Fellow at Harvard Business School and a Senior Research Fellow at the MIT Sloan School of Management.

5 No, you can’t use the bathroom, Jared and Ivanka tell their Secret Service agents