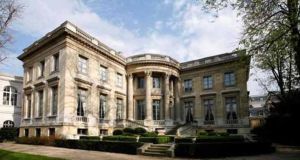 One of the sadder museums in Paris is housed in a mansion near Parc Monceau, a short walk northwest from the Arc de Triomphe. It’s dedicated to a vanished world – the decorative arts and furnishings of the late 18th century, mainly from the reigns of Louis XV and his doomed successor.

But that’s not the sad part. The museum was the creation of a once-famous and very wealthy Parisian family, who flourished in the city during the 19th and early 20th centuries, at which point they came to a tragic end. Now, apart from the house on Parc Monceau, they too have vanished.

The Musée Nissim de Camondo is not one of Paris’s better-known attractions. It’s the sort of place you’re more likely to find by accident than design, perhaps while on an aimless stroll. And in fact, I first learned of it while reading Edmund’s White’s The Flâneur, a small book about exactly that kind of strolling, for which Paris is so well designed.

So they relocated to Paris, joining what was then world’s most integrated and stable Jewish population. Moreover, such was the level of building going on there at the time, under Baron Haussmann, it was also a great place to be a banker. The family thrived anew.

The Franco-Prussian War and the period of the Commune interrupted their progress briefly, forcing them into temporary exile again, this time in London. But they were soon back, helping organise the huge loans France needed for the reparations to Prussia.

Thereafter the Camondos were an intrinsic part of the Belle Époque Paris that rose from the ruins of 1871. The best-known of them for a time was Isaac de Camondo, an enthusiastic (if bad) composer and a better art collector, who invested in the impressionists before it was popular and whose collection, donated to the state after his death, now adorns the Musée d’Orsay.

The museum at Parc Monceau, however, was the creation of Isaac’s cousin, Moise, who had gone a step farther than he did by actually marrying a work of art – or at any rate a beauty who, as a child, had modelled for Renoir. The couple had two children together – a son Nissim (for whom, after his death, the museum would be named) and a daughter, Béatrice. Then the former Renoir model ran off with an Italian count, and it was this disappointment that propelled Moise to retreat from the worlds of business and high society and to concentrate on his 18th century collecting.

But whatever the original motivation, it became an obsession. So much so that, in 1911, Moise had the existing family mansion demolished to make way for a townhouse that would itself be in the 18th-century style, complete with the smaller, more intimate rooms of that era.

By the time this was finished, however, France was at war, and Moise’s beloved son Nissim was fighting as a pilot. A picture in the museum shows him in uniform – tall, moustachioed and handsome.

From then on, his heartbroken father continued to retreat from the world, liquidating his shares in the family business and devoting the rest of his life to the collection that, upon his death, as he now decided, would become a museum named for his son. His daughter Béatrice at all time complied with the plan, even as he spent most of his fortune on it.

After he died in 1935, she completed the family’s integration into French life, or so she thought. Separated from her husband, who was also Jewish, she converted to Catholicism.  And when another war began, she ignored her spouse’s warnings to flee France.

Being both a convert and a Camondo, as White puts it, “she must have felt immune”.  But in 1942, still in Paris, she was arrested and taken with her two children to an internment camp near the city where her estranged husband soon joined them. Within a year, they were all en route to Auschwitz, from which they never returned.