Harry McGee: Sinn Féin may feel scapegoated, but facts must be addressed 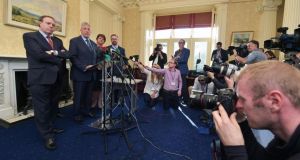 We have a full-blown crisis and bitter recriminations in the North and a set of spectacular figures in the economy down South. It’s all very 2002, isn’t it?

We must allow ourselves a smidgen of nostalgia for that particular year. Bertie Ahern was topping the charts and the boom was getting boomier.

The only dent in the escutcheon was the North where trust had broken down and the institutions were mired in crisis.

The underlying reason in 2002? The status of the IRA and those endless rows over decommissioning.

Then it was ordered the Assembly be suspended to allow space for talks. The episode served to erode the position of David Trimble and his Ulster Unionist Party.

The situation was not finally resolved until 2005 when Séanna Walsh read out the communication instructing IRA volunteers to stand down.

Is history repeating itself? Some of the choreography we are seeing at the moment is familiar but the music has changed.

For one, the circumstances now should be materially different. IRA arms and ammunition have been (largely) decommissioned.

Supposedly, there are no active service units, no intelligence gathering, no thug enforcers.

We have also witnessed the two “never the twain” parties meeting and sharing power together since 2007.

That is some achievement. In most ways the imperative tense of that IRA statement – unusually stark and direct – has held sway: “All IRA units have been ordered to dump arms.

All volunteers have been instructed to assist the development of purely political and democratic programmes through exclusively peaceful means. Volunteers must not engage in any other activities whatsoever.”

“The IRA leadership has also authorised our representative to engage with the IICD [Independent International Commission on Decommissioning] to complete the process to verifiably put its arms beyond use in a way which will further enhance public confidence and to conclude this as quickly as possible.”

The violent republican tradition that emerged in the late 1960s is close to going away but not quite there yet.

It is in the late stages of transition. There are many people who went to bed as IRA members and then woke up the next morning as core members of the Sinn Féin leadership.

That change was never going to be seamless. Like so many aspects of the Northern peace process it has involved fudge, ambiguities and subterfuge. But on the whole, that new dispensation has held.

So what were the growing pains that came from embracing democracy? The damage that is caused by the unquestioning acceptance by all Sinn Féin members that the Earth is flat and Gerry Adams has never been a member of the IRA.

That goes to the credibility of the organisation. It’s fine with its own supporters but not with some of those whom the party may wish to attract in the future.

That is also a problem in the long term and the party should not take too much comfort from opinion polls which are not much more than wetted thumbs to the wind.

Other past issues, such as those who were “disappeared” and the barbarous summary justice meted out by the IRA to informers, will need to be dealt with politically by the republican movement.

The present crisis may have been caused by stragglers, the Provisionals who became “Conditionals”.

These are individuals or small groups in areas who have retained guns or some semblance of an organisation or who have been involved in nefarious or criminal activities.

For some of these, a blind eye has been turned, as long as it has been contained.

Sinn Féin is not the sole problem child in this crisis. The UUP and DUP have both acted impetuously with their efforts to collapse the scrum.

That said, Sinn Féin cannot deny the murders of Jock Davison and Kevin McGuigan have created a political problem that no amount of trenchant language will neutralise.

Sinn Féin may reject the assessment of the Chief Constable of the PSNI that individuals with connections with the IRA were involved or the contention that the IRA as an organisation still exists, albeit now committed to exclusively peaceful means.

The unconditional release of Bobby Storey will lend itself to the Sinn Féin narrative that the crisis has been contrived. That is a stretch.

Two men were shot dead. Both were former IRA members. Those killings did not happen in a vacuum.

There is no evidence to back that assertion. Even a cursory examination of the War of Independence and the Civil War will put the lie to that.

What has changed has been the advance of democracy in the intervening century, and with it, greatly increased scrutiny and higher standards.

Sinn Féin may believe it is being scapegoated, but there are political facts that must be addressed.

In another instance of history repeating itself, the establishment of a new international monitoring commission – to ascertain if paramilitary organisations have indeed folded their tents – seems inevitable.

Stephen Collins is on leave

2 Mairead McGuinness: They don’t call me ‘Elbows McGuinness’ to my face