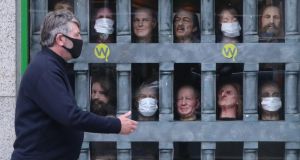 A man walks past a window display at the National Wax Museum Plus in Dublin, which has reopened following the easing of lockdown restrictions. Photograph: Niall Carson/PA Wire

With Ireland’s success to date in bringing the outbreak of infection down to a low level, and the rapid bounce-back in economic activity now in progress, an optimistic tone has begun to emerge in some commentary. Nevertheless, and despite the potential for some good news on vaccines and treatment, most forecasts do not predict a return to last year’s level of employment and aggregate income before 2023.

The large defensive spending measures that have already been undertaken by government to meet the jump in healthcare costs, to subsidise wages and to provide financial support to those who lost jobs, will have to continue for some time. In addition, the new Government will soon have to embark on a second wave of spending to support recovery and repositioning of the economy, with an announcement due shortly as part of what is being called the July stimulus.

1 Covid-19: Cabinet looks to tighten travel restrictions and decide on pubs reopening
2 Vicky Phelan: ‘There was a time when I hated being a mother – I would have gladly walked away’
3 Trump criticises Covid lockdowns and falsely claims US ‘doing very well’
4 Five Covid-19 clusters found among Irish fruit and vegetable growers
5 Dún Laoghaire home of renowned acting mentor Betty Ann Norton for €1.5m
6 Social worker overcomes poverty to graduate with master’s degree
7 Seamus Mallon: I saw John Hume’s raw courage as he faced troop of bloodthirsty Paras
8 Fintan O’Toole: Supreme Court has called time on government waffle
9 David Trimble: After the big dinner in Oslo, somebody said why don’t we party together?
10 More than 40% of help-to-buy recipients already had deposit
11 ‘I’ve had my butt kicked for the past three years’: Jamie Oliver on fame and failure
12 Cholesterol-lowering drugs may not have much benefit, review finds
13 Ethics watchdog backs staff called ‘lazy’ by FF’s Marc MacSharry
14 Fine Gael Senator is threatened with violence on social media following canvassing post
15 Gerry Thornley: Irish system to face its acid test in front-loaded return
16 Coronavirus experience shows how Greece’s weakness is its sunshine
17 Most workers now expect choice to work from home part-time
18 Tributes to John Hume flood in from Irish and international politicians
19 Shelbourne statues row a missed chance to debate decolonisation of public heritage
20 Tony Blair: John Hume was a visionary titan who helped shape my politics
21 Netflix: 10 of the best new shows and films to watch in August
22 Two people die after car plunges off road and overturns in river
23 Different Strokes: Bryson DeChambeau’s rules debates doing him no favours
24 Owner of Dundrum Town Centre to sell prized assets
25 Why are there so many angry dads?
26 Coronavirus: Warning against blame game as 46 more cases are confirmed
27 PTSB slides into loss amid €75m bad-loans charge
28 Murder investigation launched following discovery of woman’s body
29 Nine arrested following ‘shocking’ antisocial behaviour in Kilkee
30 John Hume obituary: Nationalist leader who championed ‘agreed Ireland’
31 Firefighters battle blaze on diesel tanker on Cork-Waterford road
32 DUP’s Brexit ads: Who bankrolled the secretive £435,000 campaign?
33 24 hours in Bundoran: ‘The town is mental. No one expected it to be so busy’
34 Juno Temple: ‘Real eroticism is about how somebody’s sweat tastes’
35 John Hume, architect of peace process, dies aged 83
36 ‘Somalis are the Irish of Africa’: Irish man helps rebuild Somalia’s rule of law
37 Elderly parents living in property you own will save you on capital gains tax
38 Australian state to deploy military, impose hefty fines to enforce Covid-19 isolation
39 Fathers, sons and soccer: Reflections on the family business
40 The Irish Times view on the cost of housing: putting homes out of reach
Real news has value SUBSCRIBE