Gardaí still law unto themselves 34 years after Kerry babies case

Flawed tribunal findings stigmatised Joanne Hayes. We should apologise to her

Taoiseach Leo Varadkar TD has offered an apology on behalf of the State to the woman at the centre of the Kerry babies case, Joanne Hayes, while speaking at the European Parliament in Strasbourg. Video: EU Parliment TV 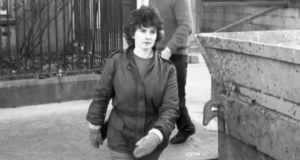 Kerry babies: Joanne Hayes at the inquiry in 1985; she did not give birth to twins and did not murder the Cahirciveen baby. Photograph: Tom Lawlor

You could not make it up. There are so many elements to the Kerry babies case that make it seem like a weird novel set in some dystopian society.

A young woman, Joanne Hayes, falls madly in love with Jeremiah Locke, a married man. They begin an affair. She becomes pregnant and gives birth to her daughter Yvonne. There is some shame, but she comes from an honourable family. However, when she becomes pregnant a second time, she becomes shunned. Her partner leaves her. Her family refuse to recognise her pregnancy.

One evening in April 1984, she begins to give birth. There is panic in the house. Eventually she gives birth; where we are not sure. The baby dies; how exactly we are not sure. But she is persuaded to dispose of the body on her own.

Calmness returns to the house. However, when the body of a dead baby is found on a beach in Cahirciveen, there must have been some wonderment among the family members as if somehow there might be a connection. But, it would seem, nothing was said. There had been no talk of the dead baby and what happened that night. It was beyond talk.

Then the gardaí swooped and they were brought in for questioning. Within hours, Joanne had confessed to killing the child by having stabbed it, and members of her family confessed to having witnessed the event and having driven to Slea Head, nearly 65km away.

The next day, following directions given by Joanne Hayes, her sister and brother found the body of the dead baby on the family farm. It later emerged the Cahirciveen baby was a different blood group from both Hayes and Locke.

Nevertheless, the gardaí proceeded with a murder charge. They devised a range of theories to overcome the forensic evidence and substantiate the twins claim.

The main theory was that as well as having sex with her lover, Jeremiah Locke, Joanne Hayes had sex with another man who was blood group A. She did this within 48 hours of having sex with Locke, thereby becoming pregnant with twins of different blood groups. This became known as the superfecundation theory.

When the case came to court, the State announced that it was not proceeding. But Joe Joyce, the journalist, had been following the case closely, and had obtained a copy of the police file. His exposé in the Sunday Independent led to considerable publicity. The central issue was how Joanne Hayes and members of her family had confessed to a crime that the State’s own forensic evidence indicated they could not have committed.

After an internal police inquiry had failed, the government announced there would be a public tribunal of inquiry into the case. It began in January 1985 and lasted 84 days.

The Hayes family claimed they confessed to their involvement in the murder of the Cahirciveen baby because of the abuse and intimidation of their interrogators. The gardaí insisted all the confessions were voluntary, spontaneous and independent. Mr Justice Kevin Lynch ruled there was no abuse or intimidation. He claimed members of the Hayes family made up stories the gardaí wanted to hear out of the sense of guilt that came from witnessing Joanne Hayes “do away with” the Tralee baby.

In some respects, Ireland was very different in 1984. It was still a very Catholic society. There were major battles raging over sexuality and women’s fertility. The previous year, a referendum proposal to give equal rights to the mother and her unborn child was passed by two-thirds.

In January of that year the bishop of Kerry, Dr Kevin McNamara, wrote to The Irish Times, warning legislators that making contraceptives freely available to unmarried people would produce seriously harmful consequences. It would, he wrote, maintain “the moral corruption of youth, the alarming increase in abortion, the spread of pornography and venereal disease, the increase in marital infidelity and the instability of marriage”.

In July a High Court judge upheld the dismissal of Eileen Flynn from her job as a secondary-school teacher on the grounds that her lifestyle was repugnant to the values of the nuns who employed her. She was a single woman who had been living with and became pregnant by a married man. In giving his judgment Justice Noel Ryan noted: “In other places women are condemned to death for this sort of offence.”

In January 1984 Ann Lovett died on her own in the rain at the grotto in Granard trying to give birth to her baby with a pair of scissors.

But what has not changed in 30-odd years is that many gardaí seem to feel that when it comes to policing they are a law unto themselves. The investigation into the case of the Kerry babies was led by senior members of the murder squad, an elite group established to gain convictions against members of illegal organisations.

Joanne Hayes was never found guilty of any crime. And yet she remains stigmatised. Despite the findings of the tribunal which concluded she was not the mother of the Cahirciveen baby, a member of the murder squad repeatedly said in the media that he remained convinced Joanne Hayes gave birth to twins.

From magic to certainty

And so we have moved from magic (a woman giving birth to twins with different blood groups) to beyond reasonable doubt, to certainty. Joanne Hayes did not give birth to twins and did not murder the Cahirciveen baby.

The legacy of the case is that the findings of the tribunal were deeply flawed. It is amazing the extent to which it exonerated the gardaí and blamed the Hayes family for what happened.

The past was a very different place in Ireland, albeit only 34 years ago. The State has apologised for what happened in orphanages, Magdalene laundries and industrial and reformatory schools. It is unlikely that it will ever apologise to Joanne Hayes, but maybe we should.

Tom Inglis is professor emeritus of sociology at University College Dublin and author of Truth, Power and Lies: Irish Society and the Case of the Kerry Babies