Fintan O’Toole: We are living with the politics of a pathetic 15-year-old boy

Trump, UKIP and much of the new populist right across Europe have the idiotic swagger of the hormonally deranged schoolboy

Donald Trump has apologised for lewd comments he made when he boasted about trying to have sex with an unidentified married woman and groping women, saying "when you're a star, they let you do it." Video: REUTERS/ WASHINGTON POST 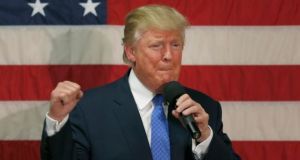 Fintan O’Toole: What’s happening across much of the western world right now is that we have whole movements (metaphorically) of 15-year-old adolescent boys. Trump, UKIP and much of the new populist right across Europe have the ludicrous, idiotic swagger of the hormonally deranged schoolboy.

In the world we used to inhabit it would be crucial to know whether Donald Trump really is a serial harasser and attacker of women.

But in the world we’re now in, even that very important question is somewhat beside the point. The point being that Trump would have spoken as he did on the Washington Post’s leaked recordings to the television personality Billy Bush regardless of whether his creepy boasts were true or not.

And this matters because, far from being, as Trump claimed in his video an “apology”, a mere distraction from the real political issues, the recordings reveal the essence of the new kind of reactionary politics that Trump embodies.

We are living with the politics of the pathetic 15-year-old adolescent boy.

It is striking that the Trump recording has emerged in the same week that two UKIP members of the European Parliament graced us with an adolescent brawl in Strasbourg. Steven Woolfe allegedly told Mike Hookem to “take it outside” after Hookem accused Woolfe of not being “a proper man”.

We all know kids like this and some of us have been those kids. It’s usually a passing phase, a product of a time when the brain is demented by hormones, the body is awkward and graceless, the face is ravaged with acne and everything is confusion and insecurity. You don’t know what you are, so you invent a stupid, puffed-up cartoon version of manhood and you wear it like a fat suit. I had her. I’ll kick your effing face in if you look at me like that again. I had her as well. What are you looking at, poof?

What’s happening across much of the western world right now is that we have whole movements (metaphorically) of 15-year-old adolescent boys. Trump, UKIP and much of the new populist right across Europe have the ludicrous, idiotic swagger of the hormonally deranged schoolboy.

And the source of this cartoonish exaggeration is the same in politics as it is in person: insecurity. The national manhood is threatened – by foreigners, by the European Union, by migrants and refugees, by the decline of industry, by the loss of a sense of control that comes with unfettered globalisation. And the way to deal with this threat to manhood is to be “a proper man”.

Whole nations are being invited to assert themselves, not through rational democratic processes, but by adopting the simian strut of the would-be mannish boy.

It is interesting that, in his first debate with Hillary Clinton, Trump, normally so carefully to avoid big words that might alienate his most poorly-educated followers, came out with a very big one. “I have tremendous income”, he boasted and then added that he was boasting of his income “not in a braggadocious way.”

It was a Freudian slip, one of those moments when the word “not” is a mere fig-leaf for its opposite. A braggadocious person is, according to the Oxford English Dictionary, “an empty, idle boaster, a swaggerer”.

The emptiness and idleness are as germane to the concept as the swagger.

If you listen to the recording of Trump talking about how he can “do anything” he likes to a woman, what you hear is not just a swaggering bully, it’s an empty, idle parody of manliness, the voice and soul of a pimply, apprehensive adolescent trapped in the thickening middle-aged body of a soi-disant billionaire.

In a brilliant piece for politico.com last week, Virginia Heffernan analysed Trump’s many radio interviews with the shock jock Howard Stern, interviews that have yielded such infamous nuggets as Trump’s claim that his battle with sexually transmitted diseases was his “own personal Vietnam” and his boast that he could have “nailed” Princess Diana.

What Heffernan points out is that in this interviews, Trump is not the alpha male – Stern is. Trump is desperately sucking up to Stern, so pitifully anxious to keep up with the shock jock’s misogynistic braggadocio that he even verbally pimps out his own daughter Ivanka, then 19. He is asked whether Ivanka might be on his Top 10 list of desirable women. “That would be a front-page story,” Trump says. “Would you like me to put her on my list?” Stern asks. “Maybe I’ll date your daughter.” Astonishingly, Trump endorses the proposition. “She has very good taste,” Trump says. “She’d probably find you very attractive.” According to Heffernan, “The daughter-pimping moment met with audible shock, even on the original shock-jock set.”

This is not the mentality of a cold, suave seducer, a Don Juan who gets any woman he wants. It’s the mentality of a kid who’s desperately insecure about sex trying to keep his phoney manhood up in a face-off with a more apparently confident male.

And this is what we hear again in the recordings of Trump’s loathsome banter with Bully Bush. A grown-up man who feels that he really is sexually attractive to the point of irresistibility doesn’t feel the need to win the approval of another man by telling him that he’s such a big star he can grab the genitalia of any woman he comes into contact with. But a puffed up little manikin with a desperate insecurity about himself and his sexuality does.

If all of this were simply about Trump’s arrested development, it would be merely repulsive. But it’s about something much bigger. The discourse of the new right-wing populism is the sex-talk of the adolescent boy writ large. It’s all braggadocio, empty, idle but deeply dangerous swagger.

“Grab ’em by the pussy” is also build the wall, keep out the Muslims, bring back all the lost jobs by simple rhetorical assertion, leave the EU and restore our greatness, feck the foreigners. The political arena is behind the school bike sheds.

1 Twitter accuses Trump of ‘glorifying violence’ as state patrol arrests black CNN reporter
2 Michael Smurfit: ‘I asked Trump to invite me to the White House for my 80th birthday’
3 We need to pay very close attention to what is happening in Britain now
4 The strain is starting to tell on Brendan O’Connor
5 Coronavirus: HSE experts support the early reopening of schools
Real news has value SUBSCRIBE