Fintan O'Toole: Voters have taken a bold gamble on normality 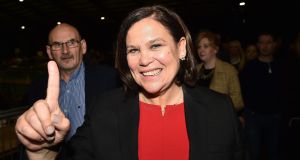 Sinn Féin leader Mary Lou McDonald at the RDS count centre on Sunday after she was re-elected in the general election. Photograph: Charles McQuillan/Getty Images

The election result is so sensational that it is easy to miss what is at the heart of it: a desire for normality. Like the American military spokesman in Vietnam who explained that they had destroyed a village in order to save it, voters have destroyed the familiar political system in an attempt to make it ordinary. They have confronted the two great anomalies of Irish politics: the half-in/half-out status of Sinn Féin and the duopoly of the Civil War parties. They have decided to get rid of both of them.

In the last week of the campaign, many politicians and commentators wasted their breath warning voters that Sinn Féin is not a normal political party. This was like telling them that it may rain in the west of Ireland. Of course Sinn Féin isn’t a normal political party – it has elements in its make-up of both cult and conspiracy. But Ireland isn’t a normal western European democracy. The island is still in recovery from a horrendous 30-year conflict in which Sinn Féin existed primarily as a support group for one of the world’s cruellest terrorist organisations.

1 Steve Coogan: ‘Come Out, Ye Black and Tans is two fingers to the British’
2 Anti-Irish bigotry in Britain has not gone away
3 Parties to continue talks with Sinn Féin despite Drew Harris’s IRA comments
4 Paul Flynn: How to cook the perfect chowder – don’t use flour and keep it simple
5 The view from Clondalkin: If Sinn Féin don’t get in, ‘there will be marches’
6 Fintan O’Toole: Irish voters' actions are not populist – just sensible
7 Pat Leahy: Fianna Fáil and Fine Gael will not crawl off and leave McDonald the stage
8 Ross O’Carroll-Kelly: ‘I just shake my head ... The dirty dog. The filthy hypocrite’
9 L’Arche founder implicated in sexual abuse of women
10 30 great family holiday destinations in Ireland and abroad
11 Drug dealer loses codes for €53.6m bitcoin accounts
12 Ben Affleck: ‘It took me a long time to admit I am an alcoholic’
13 My debating days: By Michael D Higgins, Mary Harney, Dara Ó Briain and more
14 England v Ireland preview: Ireland’s revival to face its sternest test
15 Who turned up to the Dublin casting call seeking ‘bone thin, amputees, crooked teeth’?
16 ‘IRA has gone away’: McDonald responds to Garda Commissioner’s comments
17 A Dad with brain cancer: I was given 18 months to live, it put things into perspective
18 Floods in the midlands: ‘If this was happening in Dublin it would be front-page news’
19 Coronavirus: Man dies in Italy becoming country’s first victim
20 Steve Coogan says ‘my Irish passport will be arriving shortly’
21 Keith Duggan: Liverpool’s charming man casting a shadow over Guardiola
22 Homelessness crisis: Dublin hotel received over €4m last year for emergency housing
23 Irish pack must expose the weakness in England’s backrow
24 Jennifer O’Connell: Why are women in midlife so unhappy?
25 EastEnders reaches peak absurdity with a 35th anniversary shipwreck
26 Teenager arrested after three-day barricade incident in Co Donegal
27 Would you kill one person to save five? Depends if you’re a millennial or not
28 David McWilliams: Germany needs a new business model
29 Jogger injured by galloping horse could face substantial legal bill
30 Six Nations: Ireland v England all you need to know guide
31 More than 25 people to sue over circulation of images taken at Dublin Garda station
32 Miriam Lord’s Week: A grand coalition of grudges beckons
33 Knock gets visit from world’s largest passenger plane
34 Ireland Slam England at the Gardens to open up Grand ambitions
35 Could a product from Lidl or Aldi change your life?
36 Woman found living in squalor with flies coming from blanket she was using
37 Matt Williams: Ireland will need to step up on Wales display to prevail at Twickers
38 TV View: Roy Keane but Daragh’s keener as Late Late fails to shoot the lights out
39 MV Alta: The unmanned voyage of the Ballycotton ‘ghost ship’
40 Man arrested after shooting rifle in direction of gardaí in Co Donegal
Real news has value SUBSCRIBE