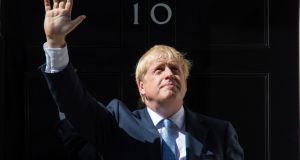 Boris Johnson on the steps of 10 Downing Street. If it was not already blindingly obvious after the election results came in on Friday morning that the political settlement on these islands is in serious danger of unravelling, it sure is now. Photograph: Dominic Lipinski/PA Wire

What lesson should the Government take from the results of the election in what is more and more dubiously called the United Kingdom? That denial is deadly. When the tectonic plates are shifting, the natural instinct of every political establishment is to pretend it’s not happening. But it happens anyway and by the time you come to acknowledge it, it is too late to try to exert control. If it was not already blindingly obvious after the results came in on Friday morning that the political settlement on these islands is in serious danger of unravelling, it sure is now. The Government’s instinct is to avoid this reality. The precedents on these islands are not good.

Brexit was always going to undermine the established order of the UK, but on Friday it became clear just how rapidly and radically this has happened. Three big pillars of political stability were cracked on a single day: Labour, the Conservatives and Northern Ireland unionism. Labour’s catastrophe is the most obvious: it has been almost wiped out in Scotland, and is much reduced in Wales, the midlands, and the north of England. But it should be noted that mainstream conservatism is even more battered. Look at classic old school conservatives like Dominic Grieve or David Gauke, both losing their seats by a margin of two to one. The Conservatives are now the Brexit Party.

1 Miriam Lord: You cannot cocoon democracy – or can you?
2 Cheltenham faces criticism after racegoers suffer Covid-19 symptoms
3 ‘Everyone still thinks it’s a joke’ - parents of toddler with coronavirus speak out
4 Ireland has strategy to ‘break the chains’ of coronavirus - WHO’s Mike Ryan
5 Are holidays booked for July and August going to happen?
6 Varadkar: Decision next week on relaxing coronavirus restrictions
7 UK makes another coronavirus U-turn but doubts over strategy linger
8 Coronavirus: Almost 100 staff and residents in one nursing home test positive, Dáil hears
9 Central Bank warns of €22bn hole in public finances from coronavirus crisis
10 Expect lockdown restrictions until September, says Dalata hotels chief
11 Stephen Collins: Second general election now a real possibility
12 Cork men quarantined in Vietnam after St Patrick’s Day party
13 Coronavirus: 13 more deaths in Republic with 402 new cases confirmed
14 Childcare workers laid off by employers who still had State subsidies
15 Think you’re bad at video-conferencing? Boris Johnson is worse
16 ‘It’s Sinn Féin against the rest’: NI Executive in conflict over coronavirus
17 Irish family pay tribute to UK medic who died from Covid-19
18 The Wine Geese: Irish exiles who started new lives in French vineyards
19 Netflix has revealed its most-watched content. You might be surprised
20 ‘It was absolute chaos, but we were able to find a sense of peace’
21 Coronavirus: European solidarity sidelined as French interests take priority
22 Pandemic robs us of the power to gather and grieve
23 International Booker Prize 2020 shortlist announced
24 Netflix: 10 of the best new shows and films to watch in April
25 Drogheda shop assailant arrested by gardaí at Covid-19 checkpoint
26 Coronavirus in Ireland: New powers of arrest for gardaí expected to come into force
27 No signs of lock-down fatigue in Ireland ... yet
28 Denis O’Brien may cede 49% of Digicel empire under debt write-down plan
29 Jean-Michel Basquiat artwork sets new auction record
30 Coronavirus: Should everybody be wearing masks to combat Covid-19?
31 The chickpea stew that broke the internet in the US is here. Give it a go
32 Don’t let your short-term crutch become a long-term drink problem
33 Quarantine in Vietnam: ‘Our first night was a little rough, it was very hot’
34 Coronavirus: Contact tracing app raises privacy concerns
35 I was on the Peru rescue flight. This is what happened
36 Seanad election: Fianna Fáil’s Timmy Dooley and Fine Gael’s Catherine Noone eliminated
37 Coronavirus: Westmeath has highest rate of Covid-19 outside of Dublin
38 Fianna Fáil and Fine Gael close to agreeing coalition framework document
39 A letter to Ireland from Italy: this is what we know about your future
40 Coronavirus: At least 750 home carers to be redeployed to nursing homes
Real news has value SUBSCRIBE