Fintan O'Toole: Trump's illusion of immunity has been exposed by the virus

Covid-19 reveals the great weakness of authoritarianism: the leader’s body 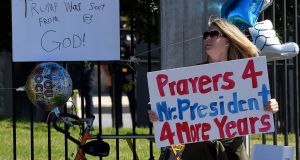 A supporter of US president Donald Trump outside Walter Reed National Military Medical Center in Bethesda, Maryland on Monday. Authoritarianism always comes down to the unique, special, indispensable leader who alone can save the nation, and whose whims, desires and gut feelings are its guiding truths. Photograph: Olivier Douliery/AFP via Getty Images

“There are some who would have thought him mad. His followers felt that he was not. It was necessary to hear and see and touch him to be sure he was not.” – Edgar Allan Poe, The Masque of the Red Death (1842)

In his admiring memoir, Team of Vipers, Cliff Sims, a former assistant to the US president, describes the system of authority at Donald Trump’s White House. It is that of not a managerial hierarchy but a royal court in which everything revolves around the person of the monarch: “The real org chart . . . was basically Trump in the middle and everyone he personally knew connected to him – like a hub and its spokes.”

1 Cork shootings: ‘Devastation was impossible to imagine’, funeral hears
2 Strong earthquake with a magnitude of up to 7 hits Turkey and Greece
3 Murder inquiry opened into death of woman and her two children in Dublin
4 US election: ‘Trump would not be caught dead here unless he wanted our votes’
5 Storm Aiden prompts nationwide weather alerts for Halloween
6 ‘Attention-seeking’ Shane Ross has a spiky joust with Regina Doherty
7 The real Contagion virus is out there and it’s causing virologists to worry
8 First full moon on Halloween night since 1955 will be rare ‘blue moon’
9 Revenue publishes list of companies tapping State for wage support
10 Woman (61) spared jail for cutting down 250 Coillte trees with chainsaw
11 Kim Kardashian’s father appears in hologram for birthday present
12 Coronavirus: Ballyjamesduff in Co Cavan over 5 times the national incidence rate
13 Two hundred Irish retailers for all your online Christmas shopping
14 Trump vs Biden: Stakes are high for the Irish economy
15 Plans for Ireland’s tallest building rejected
16 ‘Clothes are not essential’: Minister Damien English defends retail restrictions
17 Unanimous or unfair? Opinions divided on Sam Bennett’s Vuelta relegation
18 Cosy and colourful: this Wicklow cottage is a décor delight
19 Gates at Dublin’s Phoenix Park to close over weekends
20 Difficult to predict when Covid-19 cases will peak during winter, HSE chief says
21 Stephen Collins: Common sense must prevail in Brexit fisheries row
22 Coronavirus: Let’s not do the same thing and expect a different outcome
23 Ronan O’Gara: Ireland need to be braver than usual ‘in a shoot-out for gold’
24 Man (25) jailed for six years for raping and attacking former partner
25 Cork shootings: Father and sons to be buried in two separate funerals
26 Tighter regulations for car makers will drive buyers to choose electric
27 Six Nations - France v Ireland: Kick-off time, TV details, permutations, team news and more
28 The perfect traditional Irish barmbrack
29 Man found guilty of murdering girlfriend during drinking session
30 HSE ‘at war’ with then taoiseach and minister in 2019, says Reid
31 Bought a desk or a chair? Revenue rules out tax relief for home workers
32 Coróinvíreas and arán banana: A new English-Irish dictionary covers the pandemic
33 Five lessons of Stoicism: What I learned from living for a week as a Stoic
34 Sonia O’Sullivan: Nothing normal about days spent under strict hotel quarantine
35 Majority of Irish Covid-19 cases come from variant that originated in Spain – study
36 I wanted to learn more about how sex gets better with age, but my battery was running out
37 England World Cup winner Nobby Stiles dies aged 78
38 Million Pound Cube: The answer to fast cash before Britain collapses into a barter system
39 Kanturk farm shootings: A timeline
40 Medical gaslighting: The women not listened to or viewed as overdramatising or catastrophising
Real news has value SUBSCRIBE