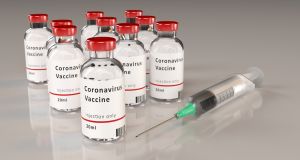 Vaccination against Covid-19 has been developed and is being tested. File photograph: iStock

In 1944, a somewhat cranky old man wrote a long letter to The Irish Times in which he gave out about “the dangerous and grossly unscientific operation called vaccination”. He maintained that “at present, intelligent and instructed people do not have their children vaccinated” and that “more people are now killed by vaccination than by smallpox”.

Unfortunately, the crank in question was not just some eccentric buffer or golf club bore. He had both a Nobel Prize and an Oscar and was widely regarded as one of the world’s great minds. He was by far the most influential Irishman of the previous half-century. His name was George Bernard Shaw.

7 Gordon D’Arcy: Time for IRFU to be bold and secure futures of prized playing assets

9 Covid-19: AstraZeneca has told HSE vaccine deliveries can be expected by mid-February

10 Fontaines DC are reborn as punk-funk disconauts, and the results are cracking

11 Kathy Sheridan: There is no fairytale ending to the Trump version of American Psycho

15 Man who sexually assaulted woman on Luas tram is jailed

18 Q&A: Can I still pass Covid on after I’ve been vaccinated?

19 Gorgeous terrace turnaround is right on track for €445k

21 What can Ireland expect from Joe Biden?

23 Could talking spread Covid-19 as much as coughing does?

26 Joe Biden to be inaugurated as 46th US president

28 Hybrids? Plug-ins? Everything you need to know about electric cars

29 Michael Harding: Talking to strangers. That’s what I miss

32 The best independent Irish craft beers, as voted by brewers

36 Taxing pandemic payment ‘could be unconstitutional’