Fintan O’Toole: The Irish political system is destroying the middle-class lifestyle it depends on 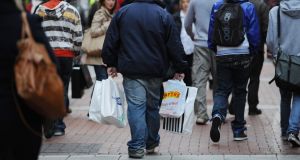 A highly educated young generation has little hope of being as well off as its parents. Photograph: Alan Betson

Can conservative politics hold together when the conservative lifestyle is crumbling? That is the big question for Ireland. Irish politics has been extraordinarily stable: every government in the history of the State has been led by the centre-right Fianna Gael duopoly. Even with radical social, cultural and religious upheaval and even in the wake of the implosion of the State in the banking crisis, the latest Irish Times Ipsos MRBI poll shows Fine Gael and Fianna Fáil on 54 per cent between them. But lift the lid and something that has been simmering away is coming to a rolling boil: the basic promise of conservative politics is dissolving.

By a conservative lifestyle I don’t mean religion or sexuality. I mean the aspiration that has been inculcated since the late 1960s in Ireland: get a good education; work hard; get married; get a mortgage; buy a house; have kids. It’s a template for living and not one to be despised. It’s the one I’ve followed myself and it offers a fair chance of happiness. Not everyone who leads this life is politically conservative but all political conservatism depends on it. Strip away the rhetorical flourishes and this is the product on offer. A middle-class lifestyle sustains a middle ground politics.

12 Paul Howard: ‘Ross O’Carroll-Kelly was born out of anger’

16 Eat, move, think: What you need to know about children’s health (teenage girls)

17 Fintan O'Toole: The State has never got its head around the pandemic

18 Fauci reveals what it was really like working for Trump

19 Walk this way: 17 tips for getting the most from your daily lockdown outing

25 Q&A: How many people are travelling into and out of Ireland?

26 Q&A: What are the new Covid travel rules and how will they work?

28 Tax relief: Expenses you can claim to try reduce your bill

32 We think we have enough for a deposit. Should we buy now or rent a bit longer?

40 Suzi Quatro: ‘If he’d done that backstage he’d have been singing soprano for the rest of his life’