Fintan O’Toole: The big danger is if Joe Biden believes everything is okay

Trump is not going anywhere, and Biden cannot proceed as if democracy is saved 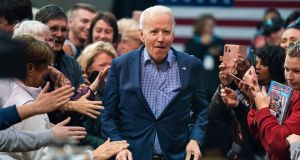 On Thursday night, as he was inching painfully towards the presidency of the United States, Joe Biden gave a brief speech in which he urged the majority that supports him to be patient. “That patience,” he reassured them, “has been rewarded now for more than 240 years with a system of governance that’s been the envy of the world.”

The problem is not so much that Biden said this, as that he just might believe it. It was arguably appropriate, at a moment when the incumbent president was trying to abort an election he had by then almost certainly lost, to say, in effect: everything is going to be all right.

6 Covid-19: First vaccines for elderly and high-risk groups likely to be available in January

8 Britain is certainly not leading the fight against Covid-19

9 Homebuyers saving for deposits during pandemic and 70% plan to buy in 2021, survey finds

11 Major concerts and matches may not go ahead in summer, Varadkar warns

13 British readying for Brexit: They never saw it coming, mate

16 Newton Emerson: Unionists will not get desired balance from public inquiries

21 Distribution of Covid-19 vaccine could start in January

24 Cold, frost and icy stretches forecast for rest of week

26 A rare brain condition: ‘I thought I was losing my mind’

27 Fairytale castle in Kerry sold for €4.5m after 13 years on market

30 Brexit: The UK and EU both need to put aside emotion and cut a deal

35 Leaving Cert: Use of historical data would allow ‘good calculations’ of grades