Fintan O’Toole: The 2004 referendum on citizenship was a disgrace to Irish democracy 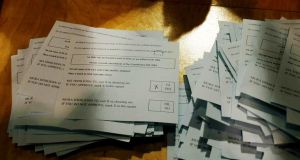 Yes votes at the referendum count in the RDS. The 2004 referendum “effectively amended not just the Constitution but also the Belfast Agreement”. File photograph: Joe St Leger

In the autumn, we will be asked in a referendum to give all Irish citizens living outside of the Republic the right to vote in future presidential elections. I imagine many people will instinctively agree that this is a good idea and as a parent of emigrants, I am one of them. There is, however, a very big grey pachyderm bellowing in the middle of this particular room. We seem not to want either to see it or to hear it. It is the definition of that nice phrase, “Irish citizens”. Fifteen years ago, we did something really terrible to it. What we did is relevant not just to the forthcoming referendum, but to the moral high ground Ireland has been occupying all through the Brexit crisis – our unwavering support for the Belfast Agreement of 1998.

On June 11th, 2004, we went to the polls for local and European elections but also to vote in a constitutional referendum on citizenship. This referendum was a disgrace to Irish democracy. It was cooked up by the Fianna Fáil-Progressive Democrats government on the basis of scare stories about foreign women coming to Ireland to have their babies purely so that those children could then claim Irish citizenship. These stories were, as the Irish Human Rights Commission (IHRC) put it at the time, “vague or anecdotal in nature”. The government did not commission a study to determine the facts so that voters could make an informed decision. It refused to refer the proposal to amend the Constitution to either the all-party Oireachtas committee on the Constitution or the IHRC, so there was no formal scrutiny before the referendum was called.

8 Letter from Saudi Arabia: ‘The Irish here are all in the same boat’

9 ‘I’m the meme queen’: A QAnon digital soldier marches on

20 Nuns who ran the Bessborough home in Cork sold part of site for €6.85m

23 Messi’s red-card outburst the act of a desperate, hopeless man

24 Five habits learned during the pandemic that we should keep

30 Ireland has greater access to vaccines through EU, Donohoe says

35 The Offload: Ronan O’Gara more than willing to take a punt on Jack Crowley