In throwing out State’s Climate Mitigation Plan, judges have done a real service to Irish democracy 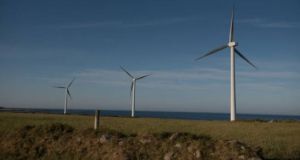 A windfarm at Carnsore Point, Co Wexford. “If [climate] commitments are not specific, how can we know whether they have been kept or not? And if we don’t know that, the whole thing is a charade.” File photograph: Getty

So, Fine Gael fans were thrilled to discover, from a widely circulated picture of a half-naked Richard Bruton, that the former minister for communications, climate action and environment is rather ripped. Well he sure is now. On Friday, he was ripped – to shreds. And those images of him in his briefs seemed to echo Hans Christian Andersen’s story, The Emperor’s New Clothes.

In that story, no one dares to acknowledge that the emperor has no clothes on until an innocent child blurts it out. In our story, the role of the child is played by the seven members of the Supreme Court who delivered what must be one of the most devastating and consequential judgments on the Irish governmental process ever made.

1 Deported man says he has lived in airport for months
2 Boris Johnson: The UK’s new Covid restrictions to last ‘perhaps six months’
3 Further restrictions expected for Dublin if Covid-19 infection rate does not stablilise
4 Ten new advisers to junior ministers to be appointed despite previous Government decision
5 Three Covid-19 mistakes Ireland urgently needs to learn from
6 Why are men still explaining things to women?
7 Dublin farmer discovers overnight rave on his land
8 Covid-19: Ireland has one of western Europe’s highest infection rates in older people
9 Australian police chief says ‘dangerous’ Irish man lied on visa application
10 Man killed in Dublin after being hit by car driving wrong way is named
11 Irish household wealth jumps by 74% since last recession - report
12 Mary Berry’s Ireland visit: here’s what she did and what she cooked
13 Fintan O'Toole: Ireland's young and working classes are in the Covid-19 firing line
14 ‘How happy he was’: Candid David Bowie photographs by his childhood friend Geoff
15 Screen time linked to rising mental health issues in children – study
16 Taoiseach defends cuts to pandemic unemployment rates
17 Eileen Flynn: ‘As a Traveller woman, I was undermined in the maternity hospital’
18 Judge gives hermit nun more time to find new accommodation
19 Suarez’ Italian language exam rigged according to prosecutors
20 Should I switch bank now with Ulster Bank at risk of closing?
21 Will brother’s widow get half of our parents’ estate when they die?
22 What next for green jersey hero Sam Bennett after toughest of Tours?
23 Brian Boyd: Rave on, Van Morrison, rave on thy holy fool
24 LeBron James has become this generation’s Muhammad Ali
25 Speak out against wrongdoing in an Irish workplace, and here is what happens
26 Flu vaccine delay should be resolved by end of October - IMO
27 EU said to be leaning towards appealing Apple tax decision
28 Life in Level 3: What is happening under the new restrictions in Dublin?
29 Teenager (14) one of five children placed in spit-hoods by gardaí
30 Five relatives charged over Longford hit and run incident
31 House insurance: save yourself money by reviewing your policy
32 Gerry Thornley: Talk of Anglo-French hegemony is over the top
33 Róisín Ingle: We’re in a different pandemic place now. Nobody’s quoting Seamus Heaney anymore
34 The secret to an airy and light scone with a pillowy interior
35 Living with Covid plan: What is in each of the five levels?
36 Why this weekend’s Champions Cup semi-finals are still worth watching
37 Banks face ‘hectic’ loan restructuring as payment breaks end, Goodbody warns
38 Judge orders release of woman who poses ‘imminent’ risk to mother
39 ‘Tax war’ will hit Ireland if digital tax talks fail, OECD says
40 Citywest Covid-19 facility transformed into pop-up allergy clinic for children
Real news has value SUBSCRIBE