Fintan O'Toole: On abortion we are subjects of Brexit Britain

Volunteers from both the "Yes" and "No" campaigns canvass on the streets of Cork and Dublin ahead of the abortion referendum vote on May 25th. Video: Reuters 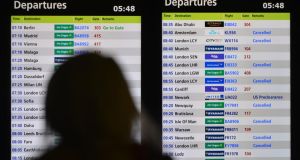 The 13th Amendment of 1992 enshrined the right to travel to have an abortion – it did not actually say “travel to England” but that is what it has come to mean in practice. Photograph: Getty

Independence means having your own state. But it is also a state of mind. There has been an independent Irish State for nearly a century, but whether Ireland has ever been psychologically independent is a whole other matter. It is a question, as it happens, that hovers over two of the biggest issues currently occupying Irish minds: Brexit and the abortion referendum. They may seem to be miles apart but underlying both is the extent to which Ireland is ready to be psychologically independent from Britain.

If we leave aside the existential questions of partition and Irish unity, abortion is arguably the last great remnant of post-colonial dependency. Where once the failure of Irish independence was symbolised by the emigrant crossing the Irish Sea on a cattle boat to get a job, now it is symbolised by the Irish woman crossing the Irish Sea on a Ryanair flight to terminate a pregnancy. When it comes to abortion, both those who want it and those who purport to despise it thank God for Mother England. Women depend on England to uphold their right to choose. Anti-abortionists depend on England to uphold their vision of a holy Catholic Ireland where such abominations are not permitted.

1 Coronavirus: ‘Significant increase’ in cases in Kildare, Laois and Offaly
2 How a ship abandoned by its owner brought deadly cargo to Beirut
3 Scientists uncover biological signatures of the worst Covid-19 cases
4 Well-known figures in Irish soccer arrested over €3m heroin haul
5 Scarlet for ya: Paul Mescal does classic Connell in The Rolling Stones’ new video
6 Ireland faces ‘recurring waves’ of Covid-19, Minister warned
7 Caroline Flack died by suicide after learning of prosecution, inquest finds
8 Masks Q&A: Who has to wear them in shops and what happens if you don’t?
9 Production at Brady’s Ham plant in Kildare stops after 80 staff test positive for Covid-19
10 Tributes paid as boy (15) who fell from Powerscourt Waterfall named
11 ‘I wandered around Dublin wondering: Is this what they call a capital city?’
12 'There is no way I would go' - Irishman in Malta cancels trip home as two weddings put off
13 Revealed: the international evidence NPHET relied on to keep pubs closed
14 Fresh investigation into the murder of Michaela McAreavey in Mauritius
15 Suspect arrested as gardaí allege ‘corrupt practices’ at statutory body
16 Gardaí surrender 13 people to Polish police
17 Coronavirus: Community transmission picking up pace as only eight counties see no increase in cases
18 Covid-19 may spread more easily in schools than thought, US report warns
19 Covid-19 has distracted us from the looming threat of Brexit
20 Two men face fraud charges over £1.2bn sale of Nama’s NI loans
21 Donald Trump’s problem is that he is not authoritarian enough
22 When I think it won’t hurt too much, I imagine the children I will not have
23 Pub reopenings in North pushed back, masks to become mandatory
24 Irish in Canary Islands: Life has changed dramatically
25 Murder accused claims partner died during sex act, court told
26 Newton Emerson: Stormont was not the centre of John Hume’s vision
27 Wifi problems? Quick tips to get your home internet out of the slow lane
28 UK offers a model for how pubs could reopen
29 Coronavirus: Ohio governor tests positive ahead of Trump meeting
30 Show us the evidence that pubs spread Covid-19, says Government TD
31 ‘Coming home to Ireland felt like a gamble. I felt safe in Korea’
32 Steady start leaves Shane Lowry’s US PGA hopes firmly intact
33 When Covid subsided, Israel reopened its schools. It didn’t go well
34 Ford Kuga: Impressive plug-in hybrid SUV underlines motor giant’s renaissance
35 Boy’s treatment by school over alleged thefts was ‘unbelievable’, judge says
36 ‘There were times I had to step outside to hide my tears, take deep breaths and then carry on’
37 Lidl seals €40m supply deal with O’Brien Fine Foods
38 What will €385k buy in Dublin and west Cork?
39 Property values, buyer sentiment remain strong in face of Covid-19
40 Felix Jones’s Georgian rescue in Co Limerick for €775k
Real news has value SUBSCRIBE