Fintan O’Toole: None of us is safe from virus unless all of us are safe

The Government has agreed an aid package of some €3bn to deal with the public health and economic impact of coronavirus. 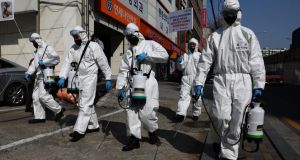 Across the road from my house, there is a block of slightly taller buildings. The extra storey was for people living over the shops below: a butcher, a grocer, a hairdresser. But the house that directly faces me has an extra layer on top of that again. It now looks super-cool. The unit has been converted into expensive flats and this eyrie has a curved glass front giving on to a balcony with, I imagine, lovely views across the city to the mountains.

When we moved in 30 years ago, this top floor was starker, less sophisticated. The glass panes formed a translucent wall through which the sun must have flooded. It could have been an artist’s studio. Except everyone knew it wasn’t. It was a TB room. When the block was built in the early 1930s, this was the best you could do for someone (a relatively privileged someone) with tuberculosis: isolate them so the rest of the family didn’t get the disease and expose them to the healing properties of sunlight. That family was gone and I never knew what happened to the patient. The curse of TB was long banished. But I still didn’t need to be told what that glass-fronted crow’s nest signified.

1 DUP’s Brexit ads: Who bankrolled the secretive £435,000 campaign?
2 Former SDLP leader John Hume has died aged 83
3 Optimism fades for pubs under next lockdown lifting phase
4 Nine arrested following ‘shocking’ antisocial behaviour in Kilkee
5 Portuguese police disperse groups of young Irish holidaymakers
6 Netflix: 10 of the best new shows and films to watch in August
7 Has Britney Spears really been judged incompetent to vote?
8 Maureen Dowd: The US president and the damage done
9 Trump gives Microsoft 45 days to clinch TikTok deal
10 On your bike: 12 reasons to get cycling
11 Una Mullally: Dublin has chance to be reborn amid Covid-19
12 Two people die after car enters water outside Co Cork village
13 24 hours in Bundoran: ‘The town is mental. No one expected it to be so busy’
14 Róisín Ingle: I’m menstruating as I write this. And I’m mad as all bloody hell
15 Pilita Clark: Working from home is starting to pall
16 Ken Early: Frank Lampard’s problems start at number one
17 Why are there so many angry dads?
18 The Offload: Schools rugby talk in the Seanad appears tone deaf
19 Five cases of Covid-19 confirmed at food processing factory in Co Offaly
20 HSE says provision of disability services by voluntary bodies not sustainable
21 ‘I’m pretty sure that if I had been somewhere else they would have just let me die’
22 Concern as OPW rejects responsibility for ancient church in Dublin
23 Covid-19: No more deaths but 53 further cases confirmed in State
24 Prominent GP Cowley dreading possible second wave of coronavirus
25 Owner of Dundrum Town Centre to sell prized assets
26 Misconduct claims in Department of Transport spark Garda inquiry
27 Poland and Hungary have not got free pass on rule of law
28 Body found in search for man who went missing while swimming in River Lee
29 Towns and villages to get €2.8m for ‘cycle cafes’ and outdoor cinemas
30 Covid-19: Senior public servants warn against any moves back to offices
31 Resolute and resilient: ‘I’m not ready to go yet. I’ve still life to live’
32 No motor tax refunds for vehicles off road during lockdown
33 'Huge increase' in falls among older people following lockdown
34 Covid-19: Johnson ‘considers plan to seal off London’
35 Coronavirus: Australia’s Victoria state orders large parts of economy to close
36 Controversial tampon ad ban by advertising watchdog could be reviewed
37 Not for the birds: Keep your blueberries for these delicious oat slices
38 Can a first-time buyer get relief on a buy-to-let home?
39 Thousands back petition demanding State aid for Aer Lingus
40 Ireland has moral duty to help end Uighurs’ persecution
Real news has value SUBSCRIBE