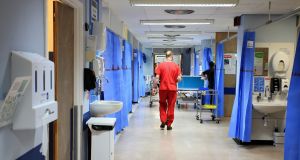 Many people in the caring professions do everything to keep a patient alive but know that a peaceful death may be much better than lingering pain and terror. Many know that the line between passively allowing someone to die and actively speeding up their death is much less than absolute. Photograph: Peter Byrne/PA

After my mother died, my father wanted to die too. He was desolate from grief – much more, I think, than he had ever imagined. He was getting into his late eighties. He had to wear a colostomy bag. He had diabetes, which gave him terrible pain in his feet. He couldn’t walk far, so his lifelong love affair with bird-watching was over. The fellow twitchers who had formed his social group were great about trying to include him. But he began to shun them because they only reminded him of what he had lost.

This was not a whim or a passing mood. He was not deranged. His depression was not irrational

Now and then, but with increasing regularity, he would talk to me very seriously and soberly and tell me that all he really wanted was to die with dignity. I couldn’t handle it. I would change the subject, move on. I didn’t have the courage to go down into his darkness. I didn’t want to lose him.

1 Woman stranded in Ireland due to pandemic has ‘miracle baby’
2 Matthew McConaughey: ‘I wouldn’t give back one ass-whupping for the values that are ingrained in me’
3 Seán O’Brien: Anger over my parents’ break-up never left me
4 Covid-19: Critical cases from NI could put pressure on services in Republic
5 Behaviour is best Covid-19 vaccine available
6 Breathe easy to maximise your running experience
7 John McManus: Is this the best little country in the world for lockdowns?
8 Don McLean: ‘My ex-wife is the worst person I ever knew’’
9 Martin Feeley: Hospital admissions don’t justify pressing the panic button
10 Una Mullally: Alan Kelly is shrewdly hitching Labour’s wagon to Sinn Féin
11 Two hundred Irish retailers for all your online Christmas shopping
12 Wet pubs and schools reopening led to rise in Covid cases, says Mayo GP
13 When Anthony Clare met ‘calculating, disturbing’ Jimmy Savile
14 Hurrah for the companies giving staff more time off
15 Covid-19: Public urged to ‘stay at home’ as 1,025 further cases confirmed in State
16 Suzanne Lynch’s US Election Diary: Trump campaigns relentlessly in bid to close polling gap
17 Róisín Ingle: We’ve started new Lockdown Eve traditions. Like Christmas Eve, only with more dread
18 US election: ‘Donald Trump needs to go. White America got what they want’
19 Transmission of Covid-19 on flight into Ireland linked to 59 infections
20 Stardust campaigner Eugene Kelly dies suddenly aged 62
21 Australia demands answers after women taken from Qatar Airways flight and strip-searched
22 Plenty of positives for Farrell as Ireland hit the ground running
23 Couple found guilty of murdering Irish dancer with ‘devil’s breath’ drug
24 Will Connors chops his way to the front of Ireland’s openside queue
25 Lockdown mid-term: what to do, watch and cook this week
26 Madness or defiance? The GAA is taking a huge gamble in staging Championships
27 US election: Trump targets Pennsylvania as race enters final stretch
28 Strengthen your muscles without leaving the house
29 Life under Level 5: Where can I go, who can I see, what is closed and what is open?
30 America at Large: Hurling fan Dowling leading the fight against Covid-19
31 Saving Tim Robinson’s Roundstone home, his last gift to the Irish nation
32 HSE spent €700,000 a month since March on external Covid-19 consultants
33 Troubles legacy: London’s break from deal ‘deeply concerning’
34 Appeal for missing woman: 'She is my only sister... it’s still torture'
35 Gardaí say 52 people who went missing in 2020 not yet found
36 High-intensity workouts may be more enjoyable than less strenuous exercise
37 Eight politicians swear statements to receive full expenses for lockdown period
38 Education sector to offer thousands of free courses to workers affected by pandemic
39 RTÉ to seek 70 voluntary redundancies as ‘large costs’ beckon in 2021
40 Ireland braced for a daunting assignment in Paris
Real news has value SUBSCRIBE