Fintan O’Toole: Labour's failure in this election will be due to Jeremy Corbyn

Boris Johnson and Jeremy Corbyn clash on Brexit, public services and trust in politics during their final debate of the general election campaign. Video: BBC 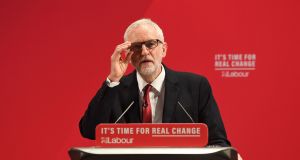 If Jeremy Corbyn cannot say what he believes on Brexit, voters cannot believe him on all the other things he cares about. Photograph: Oli Scarff/AFP/Getty

It is a mark of the strangeness of current British politics that an epoch-making election is being contested by two would-be losers. Boris Johnson is prime minister because he led a Leave campaign in the 2016 referendum that, as he assured David Cameron at the time, he expected to be “crushed”.

And Jeremy Corbyn had no real intention of becoming leader of the Labour Party for any great length of time. Historians of the future may struggle to understand how things of such consequence have been determined more by accident than by design.