Fintan O’Toole: Johnson’s treachery will be turned on Ireland if and when it suits him 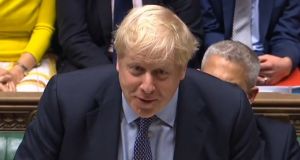 Britain’s prime minister, Boris Johnson: Has struck a terrible deal for the people of Britain – it opens the way to a hard-right, radically deregulated version of Brexit. Photograph: PRU/AFP

Beaufort’s Dyke is a trench, 50km long, 3.5km wide and between 200 and 300m deep, under the sea between Northern Ireland and Scotland. After the second World War, the British government decided that it was the most convenient place to dump about a million tonnes of unused conventional and chemical weapons, including sarin and tabun (both nerve gases), phosgene, mustard gas and explosives.

Nobody is quite sure what is down there: the British government told parliament in 2002 that “detailed inventories of chemical weapons and other munitions disposed of in Beaufort’s Dyke are no longer available; many records were destroyed after the disposals as a matter of routine custom and practice in view of the fact that sea dumping of munitions, including chemical weapons-filled items, was then an acceptable method of disposal”. The dyke also contains about two tonnes of nuclear waste, dumped in the 1950s.

6 ‘We should have done better’: Cillian de Gascun, Paul Reid and Stephen Donnelly look back

7 Wood burning stoves: The inconvenient truth about the homely heater

13 David McWilliams: Why Ireland will recover faster than others

18 Six Nations: Time for Ireland to deliver in style against Italy

20 LeBron James tells Zlatan Ibrahimovic: ‘I will never shut up’

23 Paul Flynn: Three satisfyingly simple dishes that anyone can cook

24 ‘We can’t just dump our rubbish in the gorden. It’s the Vico Road – there’ll be meetings’

25 Michael Walker: Why Marcelo Bielsa is manager of the season so far

27 Social Democrats to explore options for growth in Northern Ireland

28 Covid-19: Self-isolation rules to be eased for healthcare workers

29 Jennifer O’Connell: The Government doesn’t trust us and it’s mutual

39 Johnny Watterson: I do not buy the apology around paedophile John McClean

40 Six Nations: France and Fabien Galthié in the eye of Covid-19 storm