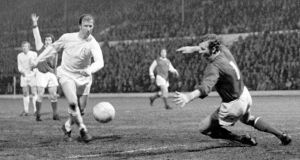 In the 1966 World Cup, I supported the Soviet Union. I did this on humanitarian grounds. A Christian Brother told me that the Russian players would be sent to the salt mines of Siberia and worked to death if they did not win. My grandmother had applied the same logic in 1953 when she shocked the priest in City Quay church by asking him to say Mass for the repose of the soul of Josef Stalin, pleading “But sure, he needs it more than anyone else.”

Besides, I liked the names: Lev Yashin, Igor Chislenko – better than Nobby Stiles anyhow. They reminded me of my hero, Ilya Kuryakin from The Man from U.N.C.L.E., a man so cool he could carry off a white polo neck without looking like a dork. And I suppose I was already then what I have always been: a perverse little git. Because every other boy, on the road and in school, was cheering for England.

1 German nudist chases wild boar that stole laptop at Berlin lake
2 Law allowing gardaí enforce movement restrictions in Kildare, Laois and Offaly comes into force
3 Midlands lockdown: ‘Why shut down Offaly and leave Dublin open?’
4 Meet the Bearman of Buncrana: ‘I knew about Joe Exotic for years’
5 Revealed: the NPHET advice to Cabinet ahead of midlands lockdown
6 Inside the dog-trafficking trade: ‘After drugs, it’s guns, then pups’
7 Meat plant clusters may be down to softly-softly approach
8 Irish in Australia: ‘We are in for a few hard years’
9 Sand-hued cyclepaths changing the face of south Dublin coast
10 Harry McGee: We are seeing the return of Straight-Talking Leo
11 All eyes on Tenet, the spy movie with everything to prove
12 David McWilliams: John Hume understood the power of credit
13 Midlands lockdown: Movement restrictions in place for residents of Kildare, Laois and Offaly
14 Caroline O’Donoghue: ‘There is a real anger in Irish millennials’
15 Frustration for Lowry and McIlroy as Li leads at US PGA
16 Masks Q&A: Who has to wear them in shops and what happens if you don’t?
17 Tanya Sweeney: You get a lot of brain space back when you stop hating your body
18 Ross O’Carroll-Kelly: ‘We could be in DeVille’s among people who get where we’re coming from. Literally the Vico Road’
19 Cars to give way for Sandymount cycle path
20 British cash for Northern Ireland shows scale of Brexit disruption
21 Cliff Taylor: As we reawaken the economy, we find Sleeping Beauty has a hangover
22 Escape to west Cork: Majestic views, spectacular food and a warm welcome
23 Pat Hume: The woman who never gave up
24 Juventus to ‘evaluate everything’ after European Cup exit
25 Scarlet for ya: Paul Mescal does classic Connell in The Rolling Stones’ new video
26 Main points: What restrictions have been imposed on Kildare, Offaly and Laois?
27 Half of people in direct provision ‘unable’ to social distance
28 Democracy for Sale: A plunge into murky waters
29 How a ship abandoned by its owner brought deadly cargo to Beirut
30 What’s the story with dining out under new Covid-19 regulations?
31 ‘Saudi Arabia is where the opportunities will happen in future’
32 Ireland's 'R number' of almost 2 a 'serious concern' as number of new cases jumps
33 Michael Walker: Pressure mounts on Barcelona to stop slide
34 Matt Damon sends message of congratulations to South Dublin school
35 10 upgrades that will add value to your home and 5 that probably won’t
36 ‘I wandered around Dublin wondering: Is this what they call a capital city?’
37 Catholic Church faces challenges as places of worship reopen
38 Pandemic problems: Experts answer your queries on sex, parenting and relationships
39 ‘Deep and urgent threat’: Martin defends midlands lockdown
40 Cambodia Bill to ban women wearing short skirts sparks outcry
Real news has value SUBSCRIBE